All On A Mardi Gras Day Part 3 Rex and more 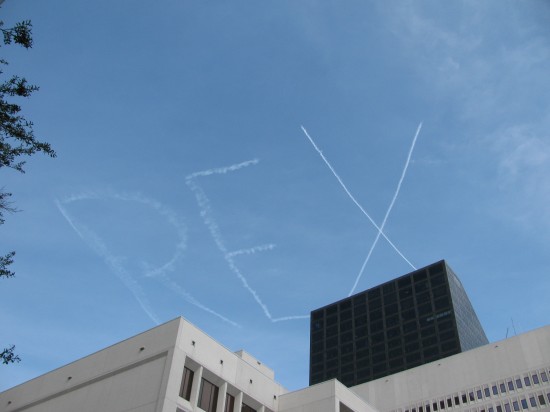 You see all sort of things on Mardi Gras Day. REX just finished being written by a skywriter, seen walking on Camp Street heading toward Canal Street Downtown. Rex is the King Of Carnival, the Lord of Misrule for the day. I did not see Rex himself this day, i was a bit late on getting over to St. Charles Avenue due to chasing Indians, see previous posts for that. Behind me is Lafayette Square and across St. Charles Avenue is Gallier Hall, where Rex greets his Queen. Rex had already passed by here by the time i got there and was probably seeing his tribute in the sky as he headed down Canal Street toward the Mississippi River. 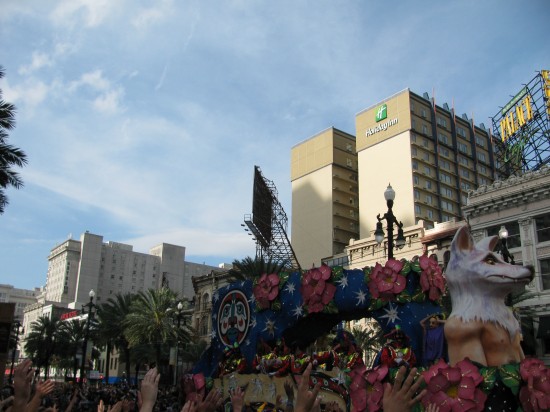 The one float picture i took, spent the rest of the time talking to folks from Uptown, Downtown and outtatown as the parade passed on Canal Street…hands held up like everybody else in the picture. This year i noticed something different i hadn’t seen before, Rex heading toward the river on the Uptown side of Canal Street. Every other time i’d seen Rex on Canal, the route was on the Downtown side of the street. Thinking about this later, i figured it was a crowd control measure. As soon as the parade passes, the barricades are opened and a flood of people head into the French Quarter. Having the neutral ground(where the street cars run, and the whole of 3 lanes of the street on the Downtown side allows for less of a crush of humanity heading into the Quarter. 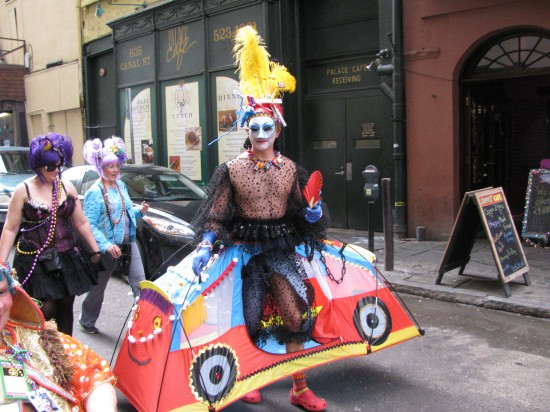 There were a number of folks with the Society of St. Ann using mini tents as part of their costumes this year. St. Ann comes out of the Bywater below the French Quarter and eventually makes its way to Canal St. for Rex, then heads back into the Quarter on Chartres St to Jackson Square, takes a right and goes to the river with a brass band leading the way… 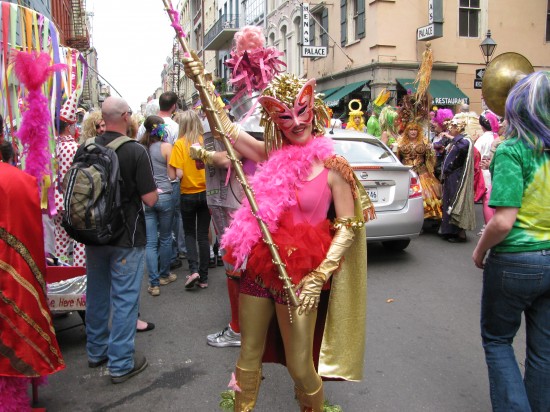 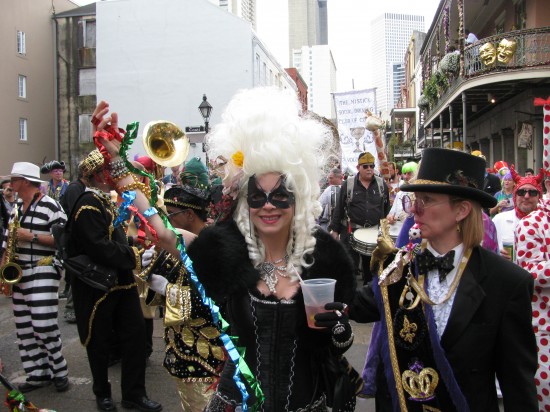 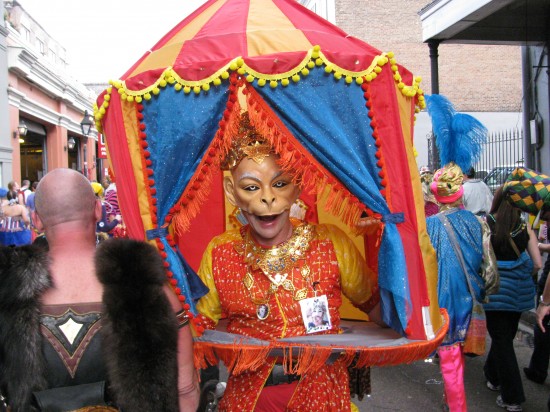 A what i think is a Hindu Monkey God costume. You’ll notice he’s wearing picture on his left chest. I looked and noticed it was Gloria Powers, a personal friend of mine, as well as friend and mentor to many in the New Orleans music community who had died a week or so before Mardi Gras. I was upset that i did not get to make her memorial service, held on the preceeding Friday, same day as our parade here in Baton Rouge. A couple of other folks were wearing tributes to her in the Society of St. Ann. I knew i was in the right place with the right group. 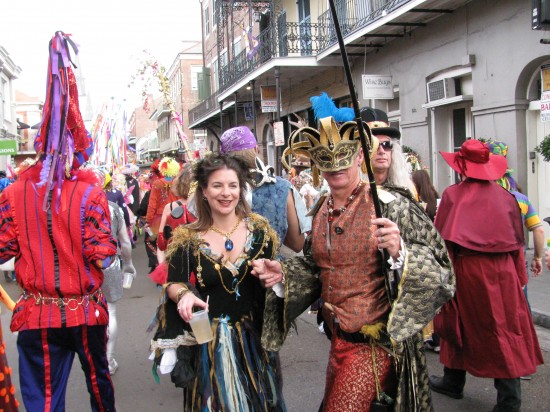 Will and Mary, the King and Queen of our Baton Rouge Krewe of Southdowns this year, mask in the Venetian tradition. The guy on the left with his back to you is dressed in a Cajun Mardi Gras costume, in the original French tradition where the peasants would mock the royalty with pointed hats. 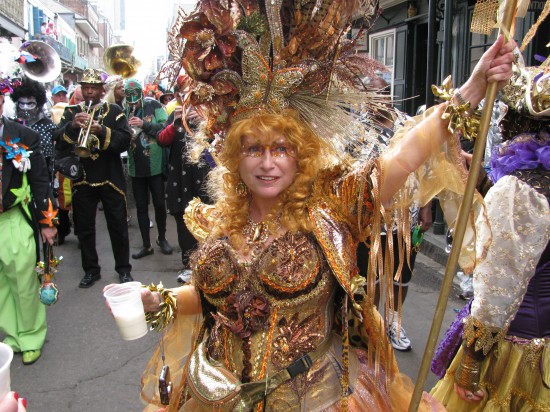 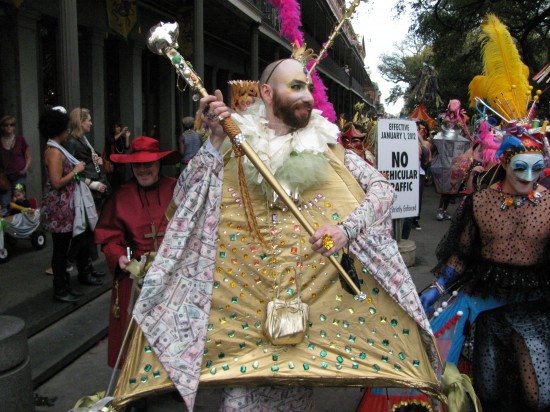 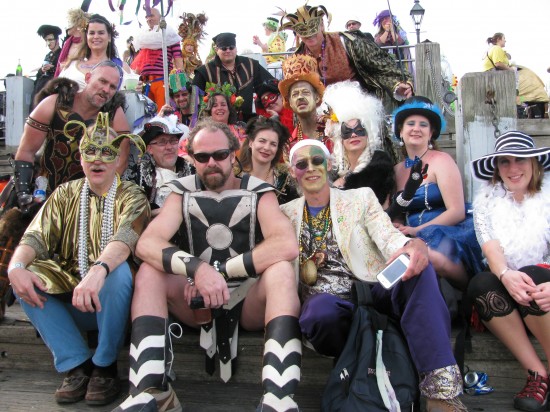 A large portion of the Baton Rouge contingen for their “family portrait” down by the Mississippi River at the Moonwalk. This is where St. Ann ends up. We all come to lay our burdens down and sing a couple songs with the band. I’d known ashes were thrown into the river, of friends who had died during the year. Some packets of Gloria’s ashes were thrown in the river this year, i knew i was in the right place at the right time then, a fitting tribute to a great woman. It can be a spiritual thing, friends, family. Mardi Gras isn’t all about getting drunk on Bourbon Street and flashing skin.  Later the group repaired to the Pontalba Apartments(see last year’s post for more pics) for King Cake, whiskey and general Mardi Gras Day socializing. A fine time was had by all once again……… 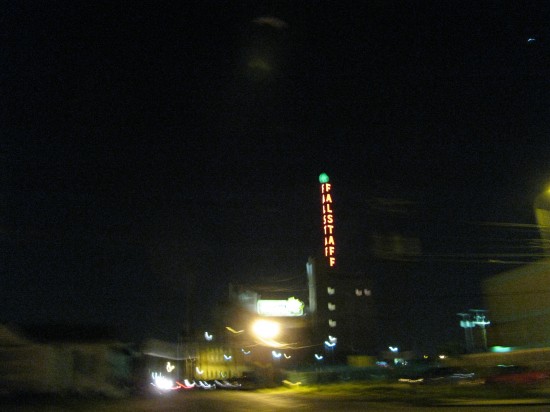 The group leaves the Pontalba Apartments for destinations of their own. Bill decides it’s time to head for home, close to 10hours on the street, most of them on the feet, which were aching a bit as well as the legs. Got in the car 12 hours after leaving home for the ride back. I thought about going by a gig put on by a friend of mine but decided that the traffic going that general direction was too much to deal with, so i headed out Tulane Avenue aka Highway 61(Revisited).  Even though Falstaff beer is no longer brewed, the sign was revamped and lights up every night. Here it is on a drive by. I’ve been meaning to get a better picture of it and will do one day….consider this your neon for this post.

What can i say other than i and everyone i know had a fine time this Mardi Gras Day. Y’all should make the trip one of these days, i can show ya how it’s done……..