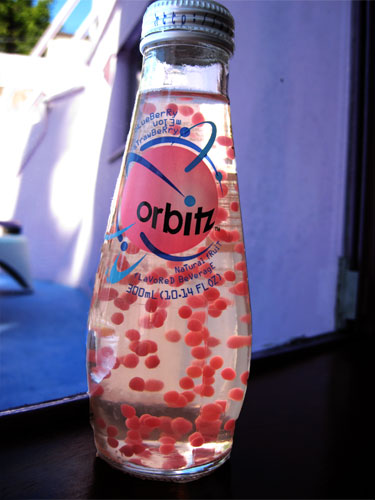 I went insane the first time I saw this drink when it was introduced in 1996. The little floaty balls hanging in space had the perfect Atomic look so I didn’t care what it tasted like, this was going to be my new official drink. In fact, Orbitz sent me ten cases of the stuff when they sponsored one of my biggest birthday parties ten years ago. Although all my guests snatched bottles to take home as souvenirs I was one of the only folks actually guzzling it down. So I still have cases of the stuff, color intact, which I won’t touch as Orbitz was taken off the market due to poor sales and I’ve got the ultimate collector’s stash.
Orbitz was a non carbonated fruit-flavored soft drink made by the Clearly Canadian Beverage Corporation. It came in  Pineapple Banana Cherry Coconut (my favorite), Raspberry Citrus, Blueberry Melon Strawberry, Vanilla Orange, Black Currant Berry and Charlie Brown Chocolate. From Wikipedia: The small balls floated due to their nearly equal density to the surrounding liquid and remained suspended with assistance from an ingredient known as gellan gum. The gellan gum provided a support matrix—something like a microscopic spider web–and had a visual clarity approaching that of water, which increased with the addition of sugar.
I’m pretty sure the only profit Orbitz ever made was when they sold their name to the internet travel company.   But it shall always be #1 in my Atomic eyes.
R.I.P (original) Orbitz.