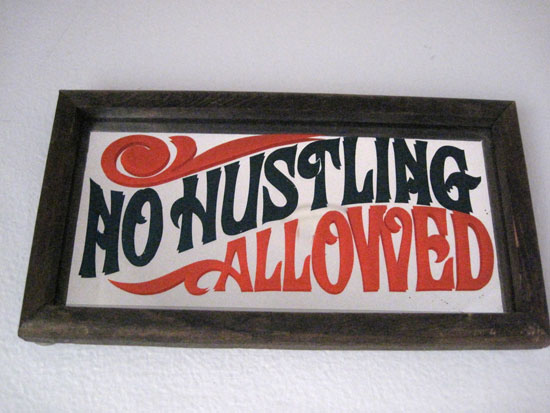 Between Van McCoys’s huge 1975 hit, “The Hustle”, and the proliferation of that decade’s gay clubs and discos, especially in New York and LA, negative connotations of the word ‘hustle’ and its older sister ‘hustling’ melted away in a fog of polyester shirts and glitter eye shadow to become one of the most popular colloquialisms of the day. ‘No Hustling Allowed’ was printed on jean patches, underwear and, thankfully, this mirror as well as anything else that could be sold in a catalog, novelty or souvenir shop.

This baby stands proud at 4″ x 8.5″ and was made in 1974 by Wallace Berrie & Co. of Van Nuys, California, makers of  rubber statues, wall plaques and other like-minded toys and promotional items.