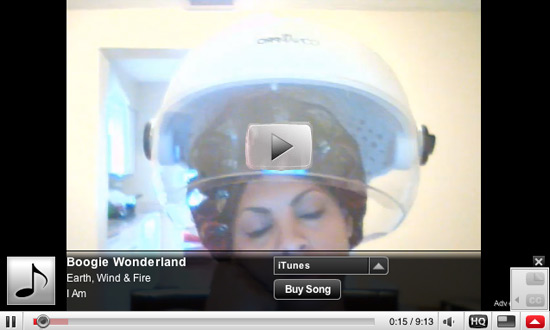 As most of you know by now, I’m one of the few songwriters who loves when their songs are used or performed inappropriately as it turns the songs into masterpieces of Kitsch. I never set out to write Kitsch as I love music too much but if I leave it in the hands of all the people who love to see themselves on YouTube I’m rarely disappointed.

As opposed to a performance, this is someone who’s chosen to verrrry sloooowwwwly show us how to achieve a Dominican hairdo using two Earth Wind & Fire songs as background music, “After The Love Is Gone” and “Boogie Wonderland”, the latter of which I co-wrote and the significance of neither in regards to the the subject matter make any sense.

With pixelated effects that happen in the first few seconds of the video and never occur again in the 9 minutes and 13 torturous seconds it takes to get the damn rollers out and hair wrapped, this is a directorial masterpiece in the filmic language of Kitsch. Among other highlights is that absolutely nothing happens in rhythm to the music, the “wind machine” only functions in one “scene” and the label on a jar of product appears backwards so you can’t possibly see what it is even if you wanted to achieve this look. Also excellent is the fact that ‘doobie’ doesn’t mean what we think it does and is apparently some kind of barrette or bobby pin.

I got excited when it was apparent that the final hairdo was going to look like a Fez. At this point, over 7 minutes in, “Boogie Wonderland” is in full throttle instrumental. That hair should have been whipping around to the strings and horns, combs and doobies flying. But alas, the Fez just gets pulled tighter and tighter, smoother and smoother, totally defying the intention of the music. And why would something be called ‘blowout’ that’s actually deflated and increases in value the flatter it gets?

Even I had trouble making it through to the final strand but from a Kitsch perspective this is a Top 10 hit!