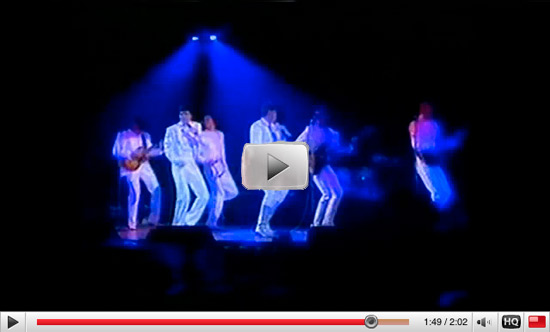 Last night Donny Osmond bagged an almost perfect score doing the Cha-Cha to my song, “September”, on Dancing With The Stars. In his former life as an Osmond he and his brothers took on my follow-up Earth Wind & Fire hit, “Boogie Wonderland”. What makes the latter performance in Provo, Utah in 1980 kwalify as Kitsch isn’t so much that Donny’s singing is uncharacteristically off, flatter than an iceskating rink in spots, but that the lyric changes made to suit Mormon sensibilities are so odd:

Original Boogie Wonderland: “You say your prayers though you don’t care. You dance and shake the hurt.” / Osmondized: “You never felt vibrations quite like this in Wonderland.”

Now, not only am I not against lyric changes when someone covers my songs (after the original, correct version is out), I’m rarely concerned with preserving the sanctity of the original record and always more interested in the individuality expressed in a new version. But I don’t understand what was so offensive about the original Boogie Wonderland lyric. I guess it was the word ‘prayers’ and the fact that you might momentarily not have faith in them when your life has crashed to the ground as the lines previous to it set up: “Midnight creeps so slowly into hearts of men who need more than they get./Daylight deals a bad hand to a woman who has laid too many bets./ The mirror stares you in the face and says ‘baby, uh uh, it don’t work…”)

I guess they thought vinyl was some kind of sex costume or toy…  I meant vinyl as in plain ol’ 33-1/3.

To Kitsch in Provo and Donny winning the prize!