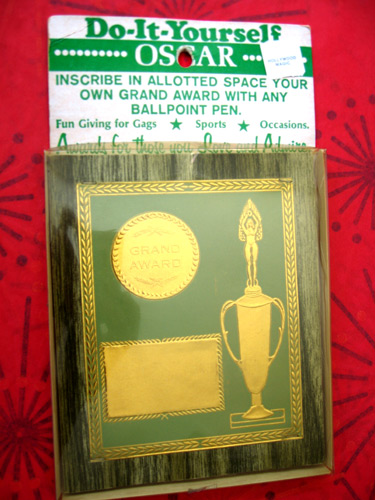 This is a product worthy of an Oscar for Best Kitsch, a fake wood cardboard stand-up “plaque” that looks suspiciously like the piece of  cardboard that comes with any cheap picture frame, stapled on, staples askew, emblazoned with a cheap gold embossed sticker with three imprints, none of which have anything to do with the Academy Awards other than a trophy atopped with a nude female athlete that kinda sorta is in that Oscar trophy pose. 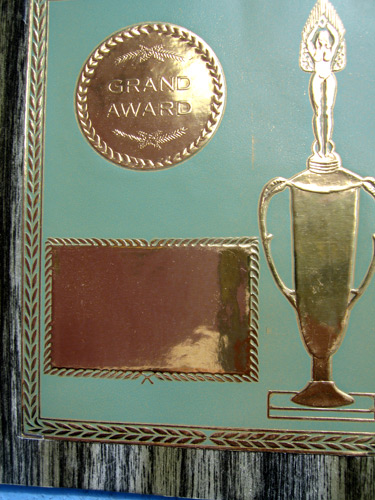 All of this is encased in a really cheap brittle plastic enclosure that’s tinted gold to make it look more fancy. The writing on the package slays me.  As if any idiot wouldn’t know to “INSCRIBE IN ALLOTED SPACE YOUR OWN GRAND AWARD WITH ANY BALLPOINT PEN”.   How elegant! And how worthy of ALL CAPS! 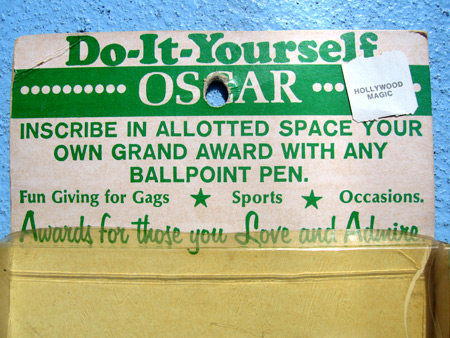 These “Awards for those you Love and Admire” – I guess ALL THREE stickers are Oscar worthy despite the lack of tie-in – were made by Syd Art Novelty Company, Inc. of New York in 1976.

The Do-It-Yourself Oscar  is “Fun Giving for Gags”.  Then come the words “Sports” and “Occasions.”,  the latter of which somehow also merits a period. Perhaps next time Syd Art could hire an actual writer rather than some family member to create the language for a product that supposedly honors achievements in creativity.

An excellent feature of this is that the price tag is still on and it’s from the Hollywood Magic store, a relic a lot older than this do-it-yourself Oscar that’s still alive and well on Hollywood Boulevard, just down the street from where the real Oscars take place tonight. 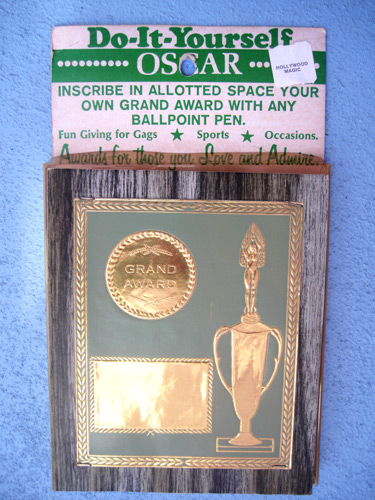