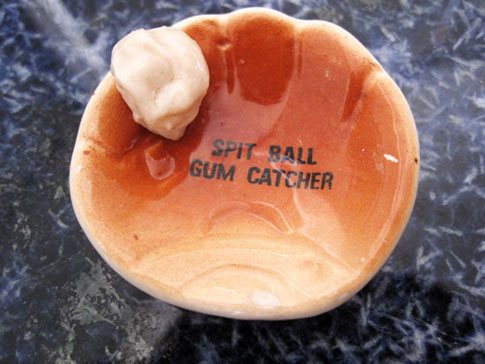 Poised to catch chewing materials when your mouth must be otherwise occupied these ceramic gum catchers had their heyday in the 1960’s and 70’s. I once knew a pug owned by a famous chef friend of mine who began every morning by racing around her restaurant eating gum stuck to the bottoms of all the tables by patrons who had no better place to dispose of their wads. Once the tables were clear, my friend would stretch out a 4′ long piece of dental floss and the pug would run her mouth back and forth over it until the spaces between her teeth were once again spotless. I’m glad there were no Spit Ball Gum Catchers around as this was such a spectacular trick! But unless proprietors own as gifted of a pet it seems like gum catchers should be on the inventory list of all self respecting food establishments.