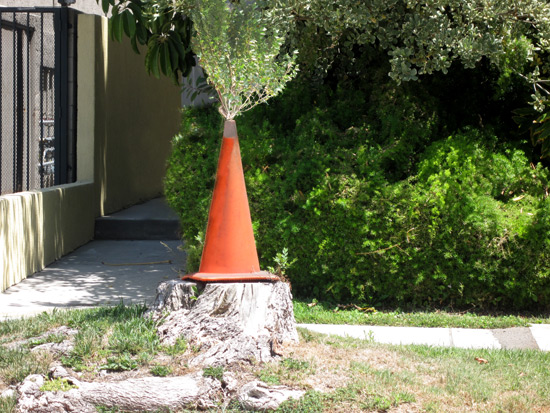 Yesterday, all 31 palm trees that surround my house were trimmed. I’m used to this being a total nightmare. As much as I love my Palm trees, 29 of which are the babies of the original two planted when my house was built in 1937, trimming all of them at the same time has traditionally been hell – expensive, messy and dealing with a bunch of tree trimming shysters. All of which makes me long for a simpler approach to fauna, perhaps this little miracle tree growing out of a seemingly dead tree trunk and the traffic cone set on top to protect it. And trust me, it’s really growing. Right on Tujunga Ave. in Studio City. I even got out of my car and tried to pull it out. It’s real.

The fact that freaks of nature like this exist, the little twig that could, busting through a stump and reaching for the sun as if it were God, which I guess it is if you were a tree, makes me wonder if the trauma of maintaining 31 palms is worth it. 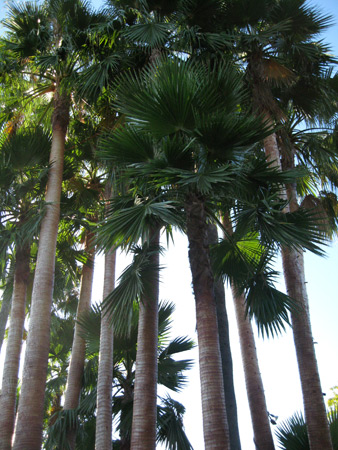 Palms are my favorite kind of tree in the world and my grove is, after all, family. The two original trees are close to 80 feet tall. They spit out enough seeds when it’s windy to populate all of Los Angeles with its kids. My entire front lawn is shaved palms that long ago took over where grass used to grow. They look exactly like grass blades except that when you get down to their level you see the blades are oblong and not straight. 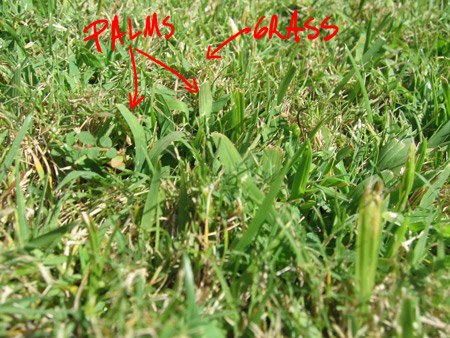 The babies even grow through rocks: 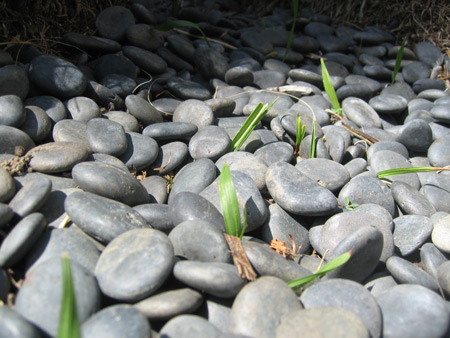 Let me tell you, for what it costs taking care of this massive palm family as it grows these trees may as well be going to college. But thank God I finally found an honest, neat and reasonably priced tree trimmer. I’m used to being held hostage for days by companies who promise me they’ll take care not to poke thousands of holes in the trunks as they shimmy up them with metal spiked heels, not to crush all the plants and flowers below and not to leave my house looking like this overnight: 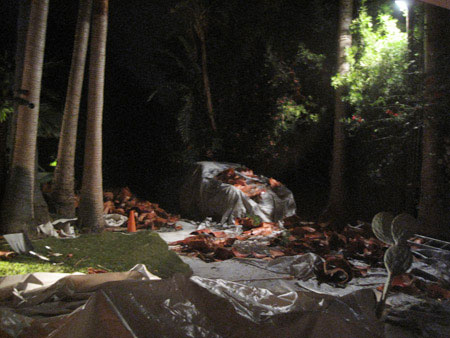 I know it doesn’t look that bad in the dark but there are palm fronds, seeds and ripped plastic covering everything, not to mention a massive shovel and ladder left out to make it convenient for anyone who wants to to break in. I usually have the happiest house on the block but when the A&M tree company took over it looked like the most haunted house on the block not to mention the dirtiest. Here’s what it looked like during the day despite the fact that the clean-up was “almost done”. 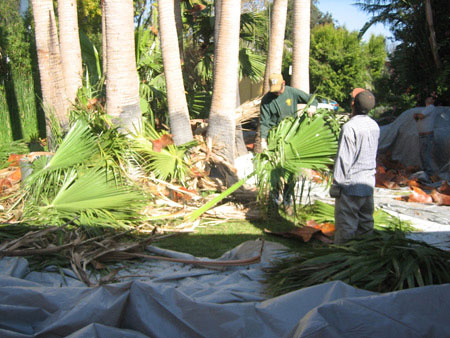 A&M even wanted to leave it like this over the weekend. I insisted on next day cleanup but that didn’t stop them from leaving a 25 foot truck parked out in front of my neighbors house for four days before they got it together to pick it up.

Once you have this many palm trees you really have to keep the trimming up because they start growing things that look like shafts of wheat (if I really knew what wheat looked like). 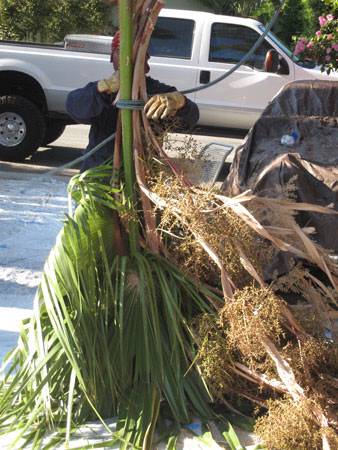 And those growths start throwing up all over everything below them so that a once pristine table and chairs now looks like this all the time: 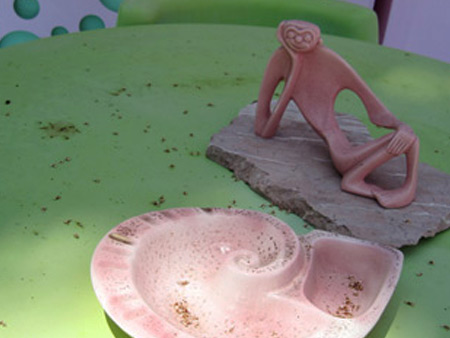 It doesn’t look so bad in the photos but some of this stuff gets really sticky and also if you sit down on a bunch of it it pokes you in the ass.

I’m happy to report that I found a fantastic tree trimming company this time, Manuel’s Tree Service. They don’t mess up your trees with those hideous cleats. They don’t bitch about not leaving jagged frond ends hanging 60 feet up in the air. They’re not too lazy to put the equipment away at night if they don’t finish in the eight hours they swore they would be finished in. They don’t whine about covering everything below in plastic and even brought a roll of their own, something that no other tree company ever did unless you call two little tattered 10 foot tarps enough to cover a nice big lawn and three cars enough. And they don’t burn out entire sections of your plants like the Thrifty Tree Service did when they parked their Chipper only inches away from my 12 foot high wall of the horse grass that burned a 5 foot hole in the wall. 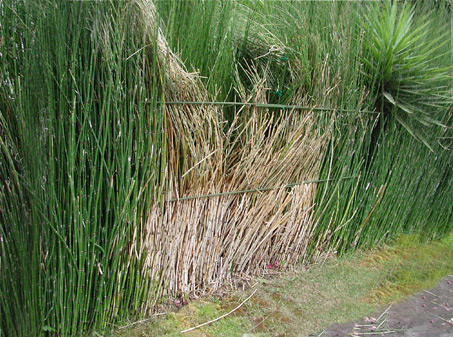 At Manuel’s they finesse those trees with skill. This guy swung from tree to tree, and I’m talking about 80 feet high in the air, never leaving a mark and clipping the tops just so. 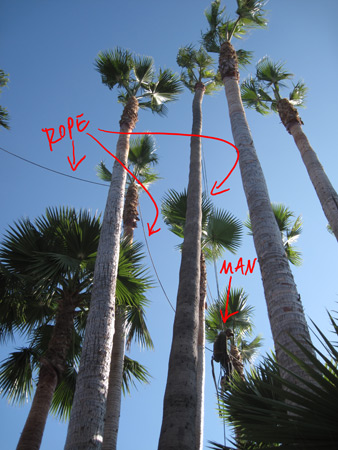 In the end, all my trees have nice new haircuts and the lady of the house spent a nice, trauma free day out in the sunshine watching an artist do his work. 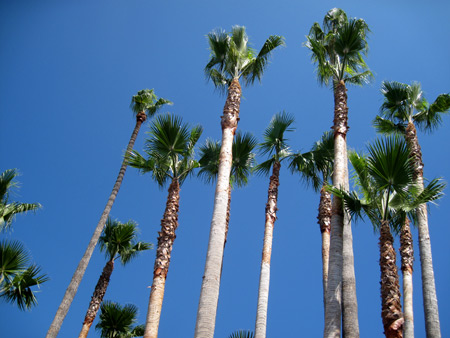 Now I have a nice trauma-free six months before the whole thing starts up again. But at least I no longer am at the mercy of companies like A&M and Thrifty, both of whom also repeatedly showed up on the wrong day because they were trimming other trees in the neighborhood and thought they could save on truck rentals. Thank you, Manuel, for turning what was once a nightmare into a pleasure. I no longer have to consider a little tree growing out of a tree trunk and traffic cone as a plausible alternative to maintaining my grove. 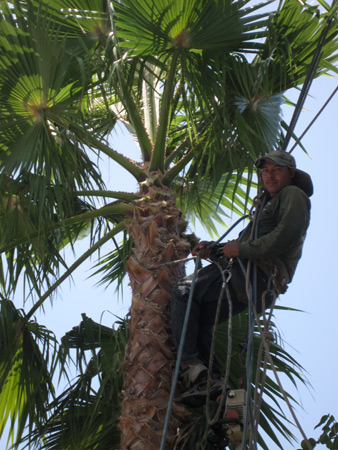