Shawn Robare grew up in central Florida, which was strangely devoid of either alligators or citrus trees, but provided much exposure to both heat and theme parks. Seeking to flee the heat and an eventual career sweating to death in an over-sized alligator costume handing out free samples of orange juice to tourists, he made his way north, but not too far north, to Atlanta, GA, where he was once again amazed by the lack of peaches the state had to offer. Refusing to obsess over the complex nature of famous local iconography, Shawn instead decided to look inward, or rather back through time, regressing his interests and focusing on all sorts of childhood pop culture, a hobby that‚Äôs led to a very irregular podcast and a very regular blog on the subject (Brandedinthe80s.com.) Oh yeah, he‚Äôs also married with two pets, if you‚Äôre into that sort of biographical info‚Ä¶ 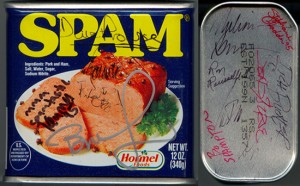 Autographed Can of Spam

I acquired this can of Spam during the sci-fi fantasy convention Dragon Con in 1996 where I had my last run at a Spam joke that would never ...