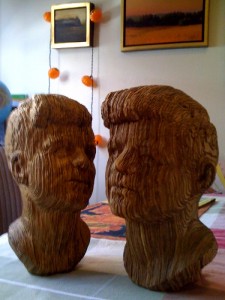 I acquired the first of these two kitsch-ennedy JFK busts at a flea market about 15 years ago. It appears to have been made by staggered-size pieces of cardboard/pulpy type material glued together to form a sculpted likeness of John F. Kennedy. It is an amazing feat, and each of the pieces has a thin black line drawn around its outside edge. In my continued wonderment over this work of art, I chanced to search for something similar on eBay about four years ago. I couldn’t believe it when I saw another one just like it, and I was on pins and needles until I was certain I’d won the auction. The second one has a thinly applied layer of metallic gold (spray, I think) paint over it. Perhaps these were made from a kit– a kitschy kit, at that. I don’t know. But they sure are American royality!

2 Responses to “The Kennedy Heads”