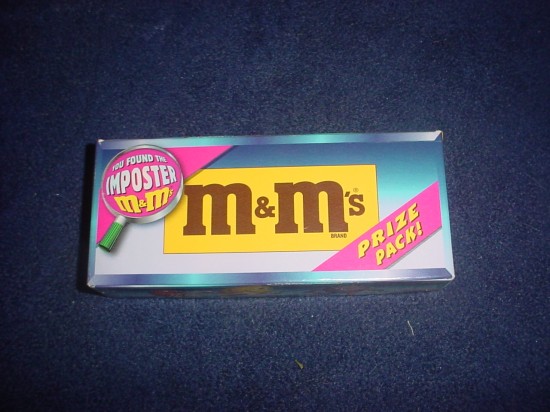 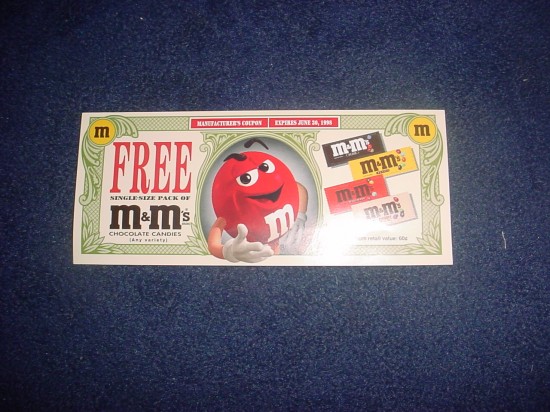 This is from a contest held by M&Ms in the mid 90s. In random packages there was a gray M&M mixed in the bunch, and if you found one you got a prize. Well, I was on my lunch break one day and decided to grab some M&Ms from the vending machine. I went outside and started eating them, and guess what I found. Since the promotions all said you could win a million dollars if you found one I assumed my bank account just got a lot bigger. After celebrating for a while I actually looked at the wrapper and discovered what I had really won. I was the proud owner of a years supply of M&Ms.

Well, I mailed in the wrapper and in a few weeks I got my prize. It was a box containing 365 coupons for free M&Ms. When they said a years worth they weren’t kidding. That was far more M&Ms than I could eat in a year. The bad part is the coupons all expired in a year and each one needed to be filled out by the cashier. I cashed in about 50 of them right before they expired, and I’m pretty sure the cashier hated me for it afterward.

What I did end up with though is the box the coupons came in and a handful of unused coupons. Since the chances of winning this prize were 1 in 300,000 I imagine there aren’t many of these out there. I have it proudly displayed now. I tried to save the gray M&M too, but that didn’t work out so well.