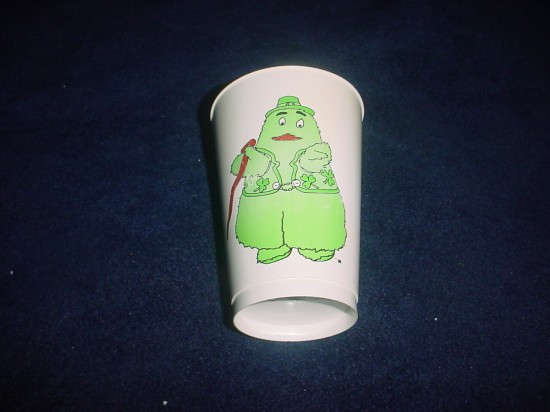 This is a cup featuring the rarely seen Uncle O’Grimacey from McDonaldland. Many of McDonald’s characters have went the way of the dodo over the years. Most were around long enough to at least leave some impression with those that knew them, even if it was just a passing memory. Uncle O’Grimacey didn’t show his face as often as the rest though, so he is largely forgotten. While Grimace enjoyed his shakes, Uncle O’Grimacey only appeared to promote one shake in particular, the Shamrock Shake. Since the Shamrock Shake is largely connected to St. Patrick’s Day his time in the limelight wasn’t long. Even if you don’t know who he is the similarities with the well know Grimace are usually enough for most people to know that he is related.