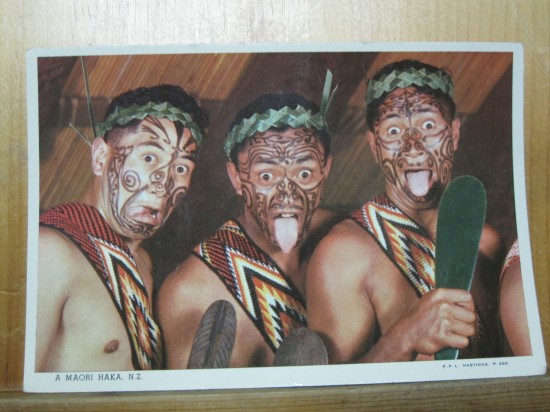 This is a postcard from New Zealand of Maori “warriors” ready for battle.

For those who aren’t familiar with Polynesian history, Maori warriors were known as fierce fighters. As if being big scary dudes with tattoos all over their faces wasn’t scary enough (right, Mike Tyson?) they would stick out their tongues and bug out their eyes to truly instill fear in their enemies. Then they’d beat people senseless with clubs. These guys were the Vikings of the south seas.

So, here we’ve got a depiction of the fiercest warriors around. Who did the casting for this? Who directed the photo shoot? Clearly, a lot of attention was put into accurate costumes and tattoo art, so, um, were these the fiercest guys they could find? It’s like they went out and found the Polynesian versions of Soupy Sales, Paul Lynde and Don Knotts. And there’s a fourth guy, cut off in this incarnation of this photo, but he’s got more of a Jim Nabors thing going on.

Years ago, I had the version of this postcard with the four guys on it, and I lent it to a friend to use as the band photo on their first LP. While I never got the postcard back, it was worth it for all the people who came to their shows expecting these guys on stage.

One Response to “Mad Maoris!”