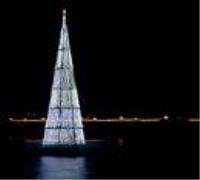 I’m not sure if this article qualifies as kitsch despite its misspellings, bizarre sentence structure, misuse of punctuation and mish-mash of topics (boxers, metal trees made of lights, various bridges, disappointed adults and children) but at the risk of insulting an entire county, the Limerick Leader never seems to disappoint on the humor tip, whether it means to or not….How could this go wrong…. This was sent to me this evening, and I had to share…I’m in tears….

Tree will be lit up on Saturday, says Council

THE turning on of the Christmas lights in Limerick took an unexpected turn this Friday when the 100-foot floating Christmas tree became the latest casualty of the inclement weather.

While boxer Andy Lee switched on the lights around the city in a festive atmosphere, the eco-friendly tree became unstuck in the fast-flowing waters of the Shannon and drifted a couple of hundred yards downstream. Only the Shannon Bridge prevented the steel structure being carried down the Estuary but there appeared to be no significant damage to either the tree or the bridge when the Limerick Leader visited the scene at 6pm.

Some people were waiting with young children in anticipation but were disappointed to learn the listing tree should have been in place at Shannon Street and the tree lights could not be switched on.

Deputy city manager Kieran Lehane said the plan now was to wait until high tide on Saturday to tug the tree back into position at Poor Man’s Kilkee and chain it to the bed. He hoped the tree lights would be switched on tomorrow.

“With all the rain, there is a huge volume of water coming down. As it was being positioned, the tide dropped very quickly and as the tide drops, the rate of flow increases proportionately,” said Mr Lehane this Friday evening.

It is understood that a rope broke and the tree began to drift west, crashing into the Shannon Bridge.

At the time of publication, fire crews, gardai and Limerick Search and Rescue were on the scene trying to secure the tree, an eco-friendly structure made from recycled metal and other materials.

“It’s very disappointing,” said Rory Ryan, Meelick, who had brought his young sons Conor and Ronan into town to see the turning on of the lights.

Stephen Lynch said he had seen men trying to position the tree in the river for the past five days from his apartment at Riverpoint.

“I don’t want to be badmouthing because I was looking forward to seeing the bigger tree. It was 60 feet last year and they made it taller this year. It’s a bit of a letdown because it looked super last year.”

Amanda Sheehan, Rathbane, said she had gone down to see the tree rather than the lights in town as she was used to meeting Andy Lee. She won a competition on Limerick’s Live 95FM to walk the Castleconnell boxer into the ring for his bout in the UL Arena on Saturday night.

“I was really looking forward to it so it’s very disappointing,” she said.

Meanwhile, Winterfest, a celebration of the opening of the Christmas season in Limerick, will continue on Saturday with street markets, art exhibitions and promotions for shoppers in the city centre, with the added bonus of the tree lights being switched on a day later than planned.

3 Responses to “Merry Christmas and Stop your Crying, Seamus!”