Grown man or teeny bopper, you be the judge 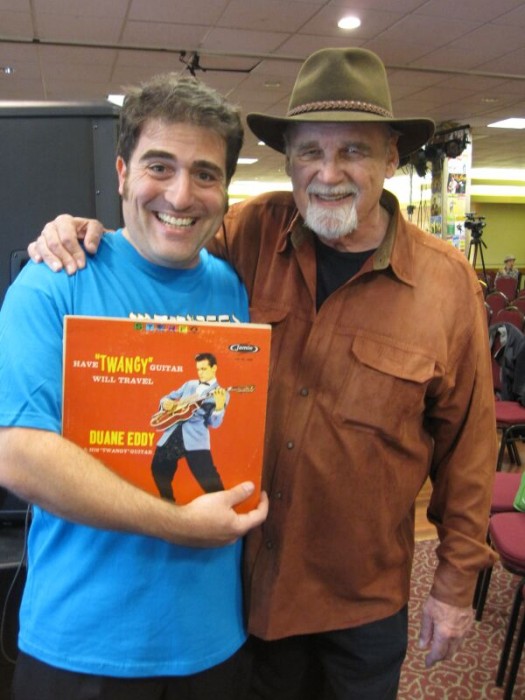 Not kitsch in a tangible way, but experiential – this Saturday I got to meet one of my guitar idols, Mr. Duane Eddy, at the Deke Dickerson Guitar Geek Festival. That’s Duane on the right. On the left is me, giggling like a teeny bopper. I’m holding the copy of “Have ‘Twangy’ Guitar, Will Travel” which I bought in 1992, prompting me to install a Bigsby vibrato arm on my ES-335 , stop singing and start twanging! Duane autographed the record just after this picture was taken.

For those of you who are fans of Duane, he’s still got it. His set was amazing, and spot on with the records. He played Movin’ and Groovin’, Detour, The Lonely One, 3:30 Blues, Stalkin’, Cannonball, The Peter Gunn Theme, and Rebel Rouser. I was hoping to hear “Because They’re Young”, my favorite song of his, but as they say in show business, leave them wanting more.

6 Responses to “Grown man or teeny bopper, you be the judge”