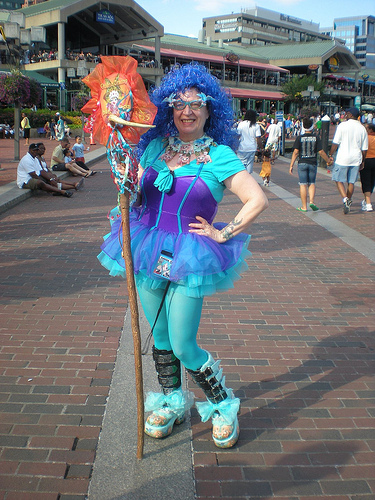 “Otakon” is a pretty kitschy event in itself. One of the largest “anime” (Japanese animation) conventions in the country, it generally draws about 25,000+ (mostly strange) people to the Inner Harbor area of Baltimore every summer. One of the big events at Otakon or any anime convention is “cosplay,” that is, dressing up like your favorite Japanese animation character.. dressing up like your favorite character from anything.. or just.. dressing up. Lots of people dress “weirdly” at Otakon, many times because they can’t do it in their normal hum-drum lives. You’ll see thousands of people in strange get-ups, frightening the other tourists and unfortunate businessmen who happened to have meetings in town the same weekend. It is a huge moneymaker for Baltimore and I’ve gone every year for going on 10 years.

It was last year at Otakon that I spotted this fantastic outfit:

The “Otakon Granny” as her staff reads, has no problem strutting her stuff. Pretty awesome if you ask me. I can’t tell what’s on her necklace. Guinea pigs? Her staff also advertises her website at http://hulitoons.tripod.com.