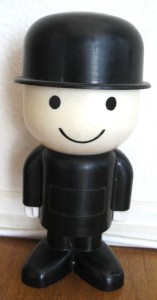 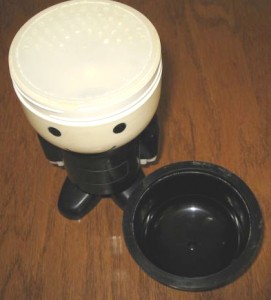 Say “Cheerio” to Fred the Flour Man. This plastic character from the mid-sixties became the mascot for the U.K.’s Spillers Homepride Flour in 1965. (The Spillers name was removed by the early 70s and was just known as Homepride– this particular chap is one of the originals, as he’s marked, “Spillers” on the bottom.) His bowler hat twists off to reveal he’s a genuine flour container with a sifter top. Form follows function.