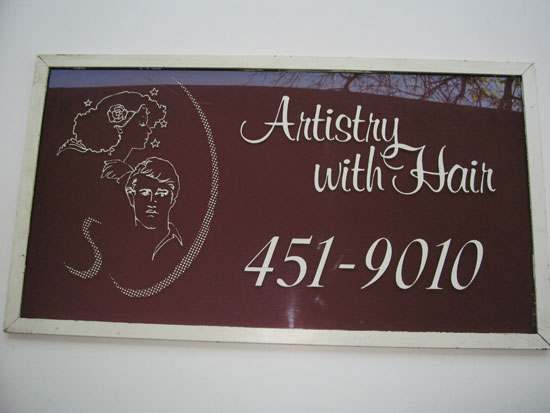 One sure shot sign of Kitsch is when someone’s idea stops at the first thought and doesn’t spin off into a more creative zone that produces deeper, more interesting and creative spinoff ideas. This holds true with any creative vision, from telling a story to writing a song to thinking of a name for your business. I’ve long been enamored with the mind that’s capable of stopping at the simple, most obvious thought. Like when looking for a name that implies your hair skills are performed with artistry you settle upon Artistry With Hair and a simple clip art logo of an 80’s couple that must have graced signs, business cards and matchbooks in thousands of salons, many of which were probably also named Artistry With Hair or something perilously close, during that decade when this sign was undoubtedly made. And if it was made later than the 80s, double kitsch points for sticking with so dated a look.

What is just as simple and at the a same time not anywhere near as simple – the kind of organic incongruity that’s become a comfortable pattern in my life – is the matter of my own hair which is having its roots touched up as I write this. 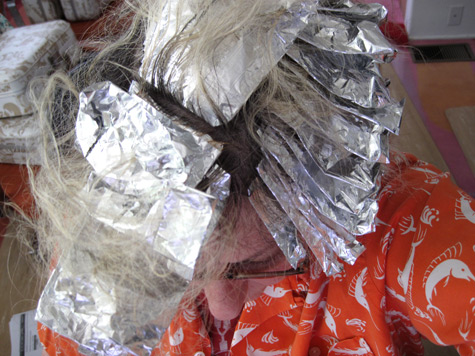 Maintaining my hair style is the simple part. I’ve been cutting it myself every morning for 27 years – long on one side, short on the other, shaved part way up the back or not depending on my mood. 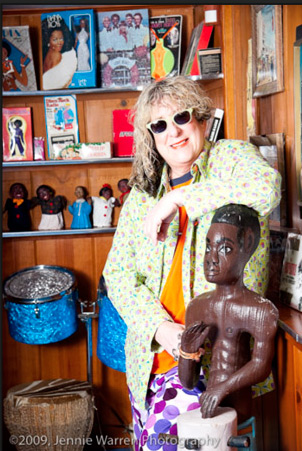 Acquiring the hairdo was the not-so-simple part. After having long, curly even locks for 10+ years, a disastrous trip to the hairdressers in 1984 resulted in a wispy Farrah-Fawcett-flippy-bangs-and-whispy-strands-of-hair-around-the-face cut. This was 7 years after The Farrah hit which caused me, always style conscious and never wanting to embrace a trend unless I was one of the first ones there, to go into a 31 day lockdown cutting more and a little bit more off one side every day in attempts to find an ideal length. Finally, I was forced to go out lopsided as months before I had invited a bunch of frends to see the opening screening of Rhinestone, a really bad, kitsch filled film starring Dolly Parton and Sylvester Stallone. When no one even reacted that something very wrong was going on on one side of my head I figured it just looked natural and stayed with it, uncommitted to a perfect length to this day. It led to a fantastic conversation with Farrah about my hair. And here we are 27 years later with me still lopsided. Such is the nature of “Artistry With Hair”. 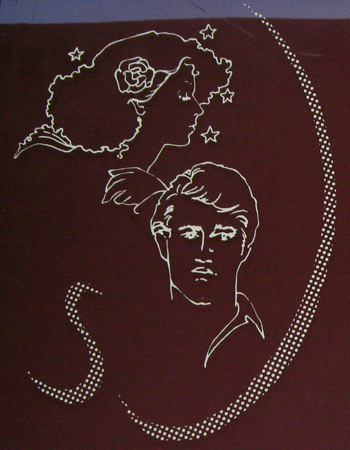