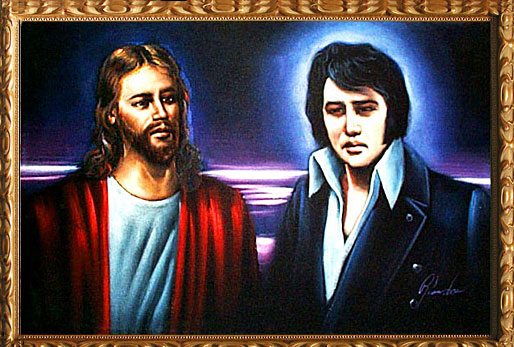 Almost anything painted on velvet attains instant Kitsch status but when it’s the two most iconic figures of all time together on the same velvet stage, well, that’s the koolest kind o’ Kitsch kick possible. I don’t know who would open for who but it’s one koncert I’d kill to kome to, me who rarely sees live music though I guess in this case the live thing wouldn’t be a problem.

This is velvet painting royalty no matter how you kut the kake. I hate people who make everything kute by using the first letter of the word they’re spotlighting the same in every word, in this case Kitsch. Sorry, I can’t kurb my kumpulsion to komply in the kompany of such Kings..

3 Responses to “Kings of Kings, The Jesus & Elvis Show”