From: shemigsam – “sandugo xmas party dec.18,’07
(Clothing and dancing aside, listen to the singer.) 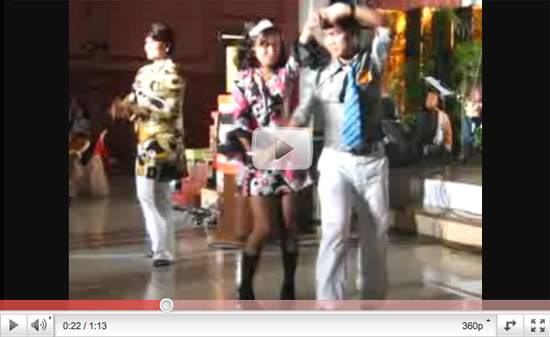 From: atube47 – “Graig dancing to September by Earth Wind and Fire”

From: Amir07Ghasemi – “This was modeled after the following video by Dutchwest.tv: I think we did a pretty solid job recreating what they did with the resources we have. We recorded this for a video project at Normal Community West High School in Normal, Illinois. Extra Note: Youtube partially mis-aligns the music with the dancing, so it doesn’t run together perfectly, but thats not a big deal.”

From: pinaysaxplayer – “karaoke at joannas. i, joanna, claire. september-…”

From: ontaifamily – “What happens when you leave us alone with a video camera, ITunes, and a video editor…… ”

[Allee: Hi cheese points for talking through the dance steps but never doing it to the music.]

From: timeafter – SLIIDE!! SLIIDE!!! I just had fun saying that. At a family party.

From: jhannio – Dance dedicated to the 70’s song of the month September. Miami Prayer Group dance

[Allee: A big wow on melodies, dance moves and straightened out rhythms and cherry harmonies]