One year my wife made me an ornament for Christmas and it was so beautiful we started a tradition of making each other ornaments every year. There are now many, and I’ve decided to share the ones that have some kitsch value. The ornament below is the first one that started the whole tradition. My wife, Valerie, took a porcelain half-doll (which once had a whisk broom for a bottom), made her a skirt out of a dried rose and a leg-like base of an old shell of some sort, with a vintage button at the top of the string. She sprayed the rose with some sort of finish so it’s actually survived many Christmases.

The ornament below was for the Christmas of the year of our tenth wedding anniversary, hence the number “X” on an old domino. I made this collage on top of a woman’s bracelet and each of the items has significance– Ridpath was the street of the first home we bought the year we got married in Laurel Canyon– I couldn’t believe my luck when I actually discovered a vintage swizzle stick with the name Ridpath on it! The Charlie Chaplin figure is for the hotel that Chaplin owned in Montecito where we stayed the night we got married. The flattened penny is a souvenir from Universal Studios (where I was working at the time), and the pin in the lower left hand corner is for an Abortion Rights march on Washington– Valerie was working in the women’s movement back then. 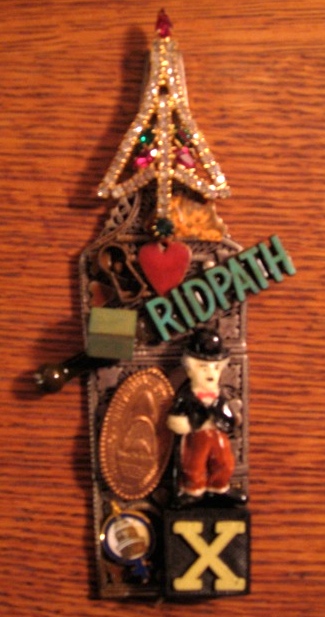 If I recall correctly, Valerie made the ornament below by glueing all sorts of vintage Christmas items (including a creepy celluloid Santa) onto a toilet paper roll that’s been carefully disguised. 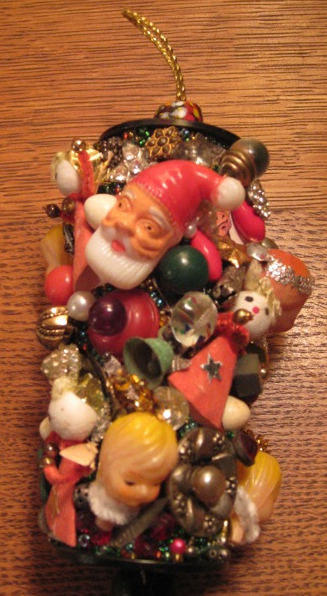 I made the ornament below for the Christmas of 2001–yes, just three months after 9/11. Some might say it was too soon for this kind of humor and they would probably be right. I took a plastic Santa and turned him into Osama Bin Laden by painting his beard grey and black, giving him a turban, putting an American Airlines plane in one hand and the Koran in the other and dangling a bomb from his arm. 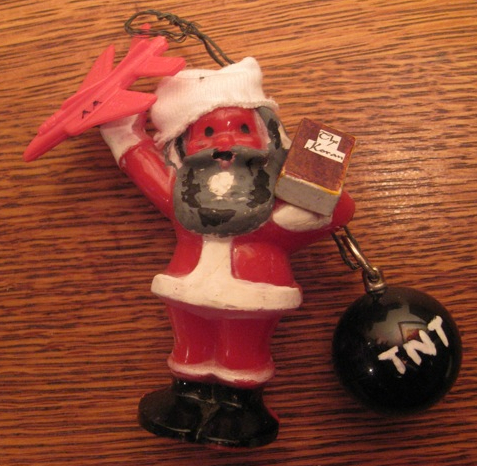 Valerie made this spectacular ornament mostly from old swizzle sticks and cocktail toothpicks. It’s about 10″ in diameter. 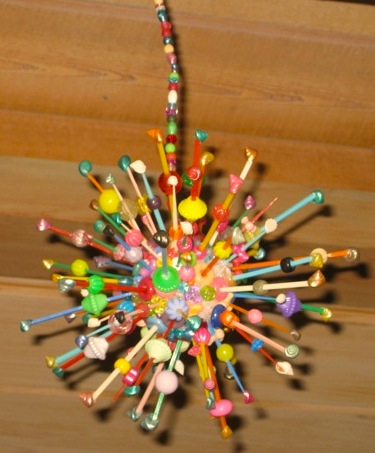 I made this decoupage ornament from illustrations from vintage children’s books and old doll parts. She once had two arms– I need to find another one and replace it. 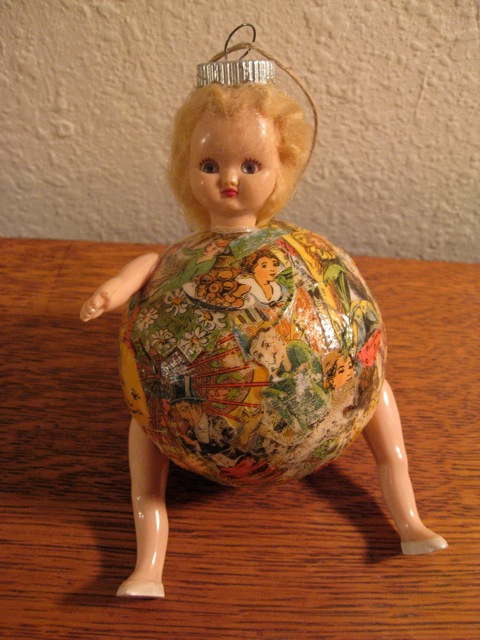 This is definitely the heaviest ornament ever made. It actually makes the tree bend over to one side. The stem at the top is made of old buttons, but the pieces that decorate the sphere are actually aged and weathered pieces of terra cotta tile that we found washed up on a beach in Mallorca. 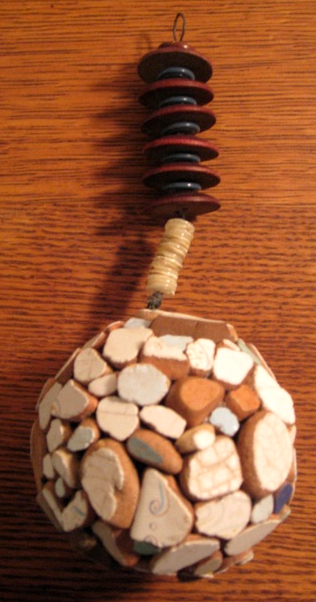 This is sort of a Day of the Dead ornament I made. You can actually open the mouth on the big skull.

Happy holidays to Allee and all my AWMoK friends who’ve made this a memorable year for me by sharing all of their amazing stuff.