One of the first things I tried to do when we originally built the interface that enables The Allee Willis Museum Of Kitsch at AWMOK.com was to have some kind of button that acknowledged how popular a particular piece of kitsch was. But WordPress, the Museum’s enabling architecture, not only didn’t allow for anything that involved the tallying of votes but actually allowed very little of what you’re seeing here at all. We had to be very industrious little workers on this end to present kitsch in such an elaborate fashion! Just compare this to any other blog built using WordPress and you’ll see what I mean. But back to the jealousy at hand…

I was okay about the sacrifices I had to make as to the limited features I could build into AWMOK until quite a few people left comments saying that they really wished there was some kind of button to hit if they were jealous of a particular item.  I tried to make this work back then but there was just no way to do it given the limitations of WordPress. But several updates have occurred and I’m happy to say that we can now implement the little green monster!!!! 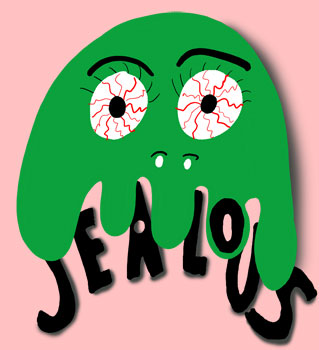 So, a few words on how to be jealous… First, you must be logged in or nothing will happen when you press the jealous button. Once you’re logged in, should you choose to express your jealousy, it will manifest in several places:

1) On the home page. Should you be lucky enough that your  submission meets the standards of supreme kitsch and an aKitschionado/s other than yourself hit/s the jealous button because they’re kvelling and dripping with enough green goo so as to wish that the item were their very own, it will show up right here on the home page:

2) The actual “jealous button” appears at the top of each submission page. Here is where you HIT THE JEALOUS BUTTON to register that, in fact, the content of the post causes you to have bloodshot eyes as you drip green with envy. If anyone has been jealous before you, the number of jealous people will appear next to this button. 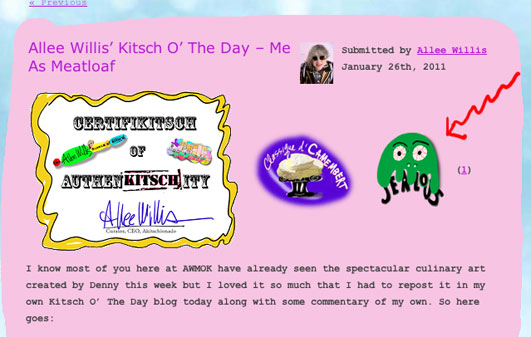 3) There’s also a jealous button at the bottom of each submission page, just after comments. You can also HIT THE JEALOUS BUTTON here. If no one else is jealous yet, the button will look like this:

If anyone else is jealous before you are, the button at the bottom will look like the following. As you can see, you’ll be able to see exactly who is jealous of what.

You can only be jealous of a particular item of kitsch once. So if you hit the goopy green thing and he doesn’t react, it means that your envy has already been recorded.

I hope you all enjoy being jealous.  As always, I’m open to any suggestions you may have to improve your experience here at AWMOK. I’m happy to put all my time and spare change into pleasing you (really).  I hope you are very jealous today!

17 Responses to “BIG AWMOK NEWS: THE JEALOUS BUTTON IS HERE!!!”