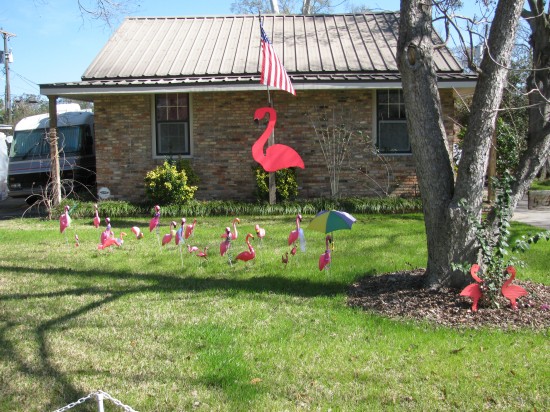 Looks like the first flock of flamingos has arrived in time for the Spanish Town Mardi Gras Ball and parade here in Baton Rouge. These were sighted in my neighbor Terry’s yard just down the street from me. The flamingo is the official mascot of the Spanish Town parade, always a highly irreverant and politicized affair. This  years theme is BP Blows and Wiki Leaks. The Ball will be Saturday 2/12/2011 with the headliner being a former local fellow by the name of Johnny Ramistella better known as Johnny Rivers. The parade will be Saturday March 5th starting at high noon beginning and ending in front of the State Capitol on Spanish Town Road winding it’s way thru downtown Baton Rouge and witnessed by a crowd in the hundreds of thousands. It’s a great time and fun parade to be in. Y’all come on down and check it out. More to follow…..

6 Responses to “Flock Of Flamingos Sighting”