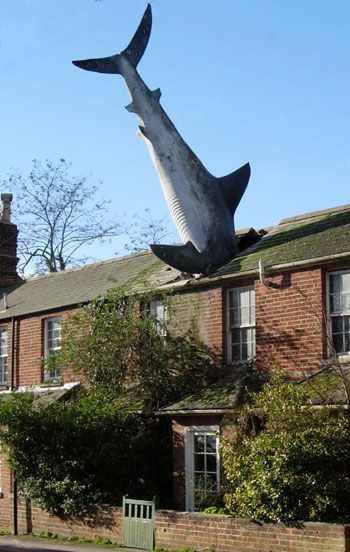 The Shark became the most famous resident of Headington when it landed  in the early hours of Saturday 9 August 1986. The headless sculpture, with the label “Untitled 1986” fixed to the gate to the house, was erected on the 41st anniversary of the dropping of the atomic bomb on Nagasaki. Created by the sculptor John Buckley, it is made of fibreglass, weighs four hundredweight, and is 25 feet long.

Oxford City Council tried to get rid of the shark on the grounds that it was dangerous to the public, but engineers inspected the roof girders that had been specially installed to support it and pronounced the erection safe.

The council then decided that the shark was development within the definition contained in Section 22 of the Town and Country Planning Act 1971, and that as such it had to be removed. Their offer to display it in a public building such as a swimming pool was not, however, accepted by Bill.

Bill played for time, but in 1990 he was refused retrospective planning permission by Oxford City Council. Undeterred, in 1991 he appealed to the Secretary of State for the Environment (then Michael Heseltine); and in 1992 Heseltine’s Inspector Peter Macdonald came out in favour of the applicant.

One Response to “Shark Attack”