Up at 5am before the alarm,  this is the only day i’ll gladly get up that early. Gaye once made a statement something to the effect of “Christmas is for kids, Mardi Gras is for big kids!” I’ll buy that. In and out the shower, grab a Hubig’s pie to eat, costume on, paint your face(really good cream makeups in purple green and gold, the Mardi Gras colors), backpack with water and rain gear in the car heading east on I-12 to Madisonville into a bit of rain and to your dates parents house.  Arrive at 7:30am in full costume with painted face. The surreal factor wasn’t as high as 2 years ago when i arrived under similar circumstances  and her parents not having seen me in a while, or in costume. 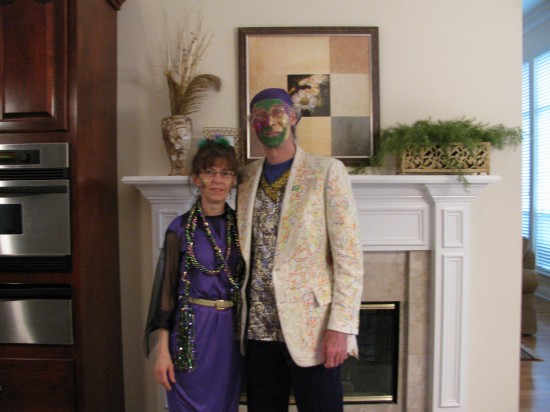 The pre we’re going see the Mardi Gras picture. Consider this the prom picture you wish you could have gotten away with or one from a surreal universe…then it’s into the car after Melanie used the makeup to do butterflies on her cheeks and off across the Causeway to the city and into the belly of the beast. Park at Baronne and Julia in the Central Business District and it’s off towards St. Charles Avenue on Howard to Lee Circle then uptown to Jackson Avenue to catch the bulk of the Zulu Parade, elements of which are already on St. Charles where this video of the Zulu King comes from…http://www.youtube.com/user/BatonRougeBill?feature=mhum#p/u/8/r2x4gNG_VYU Unfortunately i didn’t get any good still shots of Zulu so i hope this short vid suffices.

The St. Charles Avenue neutral ground that the streetcars run on as well as the opposite side of the street are jammed full of people all the way uptown and downtown. Many folks have the barbque pits operational and are cooking chicken, ribs and sausage among other things. This gentleman was frying up some black pot fried chicken and it sure did smell good, guess i should have taken a pro-offered piece. 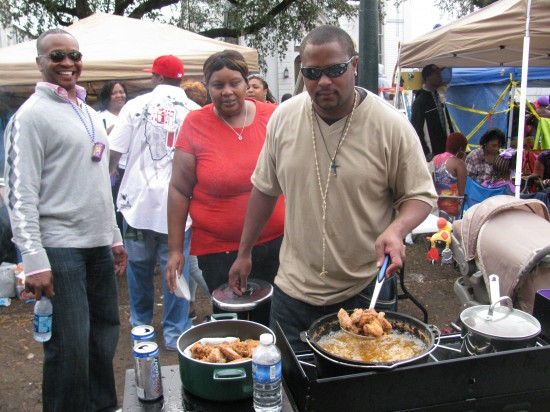 All sense of time has been lost, you’re living on excitement and for the adventure of it all. It’s uptown to Jackson Avenue and Daneel, a spot i’ve been going to see Zulu at for a number of years. We get there for the bulk of the floats and marching bands. There’s nothing like being on the street when a band plays in front of you, lotsa fun, the whole street is rockin for sure. Now imagine my surprise when coming down Jackson towards me is a high school band from Detroit Michigan, the Inkster High Marching Band seen in this video, hope this gives you a good feel for the street…http://www.youtube.com/user/BatonRougeBill?feature=mhum#p/u/11/gLhIMCyzyLM 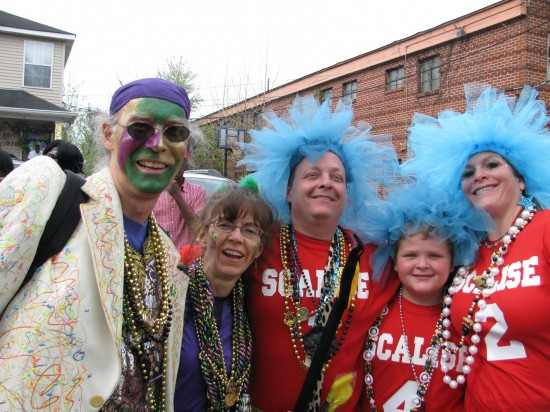 In this group shot you’ve got Bill, Melanie, Fabian, David and Michelle. We’ve seen a few floats from the look of the bead load on each of us with more to be added at every opportunity. The Scalise family is carrying on an old New Orleans Mardi Gras tradition in which all members of the family dress alike. These folks have done that since i’ve known them for many years. They were in a group with a couple other families all dressed the same way except with their own family names on their shirts. Makes your group easy to find that way. They all had a base camp  a few blocks away on St. Charles Avenue which we found with ease after Zulu. 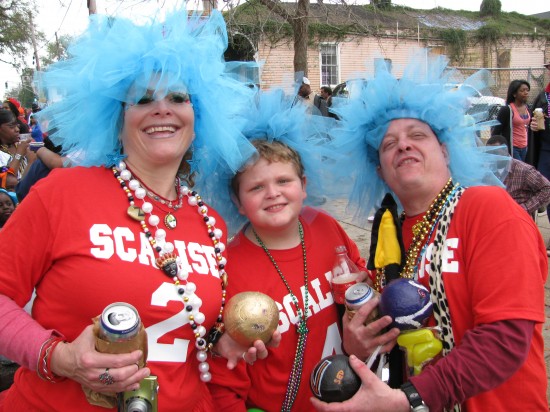 Here the Scalise’s show off some of their coconuts. Coconuts are the prize throw from Zulu and that’s what everybody wants “for my grandbaby”, whether the grandbaby is there or not. 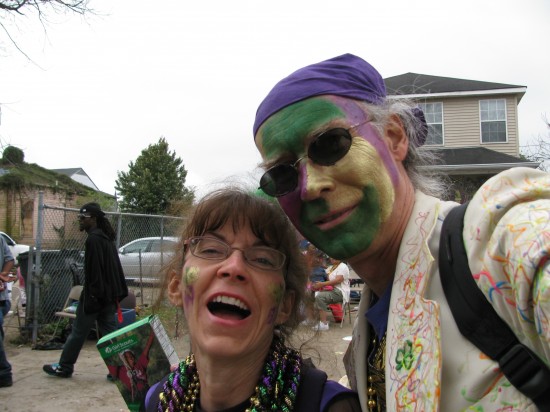 …and speaking of coconuts, i want to get one too and for that one must grovel heavily or pass the rider a beer or in this case, Thin Mint Girl Scout cookies(what??!? you mean they make another kind?). It’s not too often Mardi Gras comes during GSC season and i’d seen this used once before a number of years ago. I’m gonna give it a go, i got two boxes. “Coconut for my wife!”(exwifefromanotherlifeinevermarried) worked twice! and i don’t have any grandbabies. Hope the riders who got the cookies liked them. We ended up with 3 coconuts, two of which Melanie got, i got three of the four Zulu tambouries and each a bag full of beads.

We’ll end this part of the adventure with a photo of one of the Mardi Gras Indians, the Soul of the Mardi Gras . He was from the Wild Mohicans and is not fully dressed as he does not have his crown on yet. This tribe was suiting up and going to come out from the house directly behind my head in the above photo, a surprise to all of us. There are many Mardi Gras Indian tribes that come out on Mardi Gras Day. This tradition of blacks masking as Indians most likely goes back to the days of the last 1800s when Wild West shows would come thru town and also taking into account  runaway slaves being taken in by the Native American tribes in the local area. The contest is to see who is prettiest dressed these days instead of days of old when arguments were settled with knives and guns. 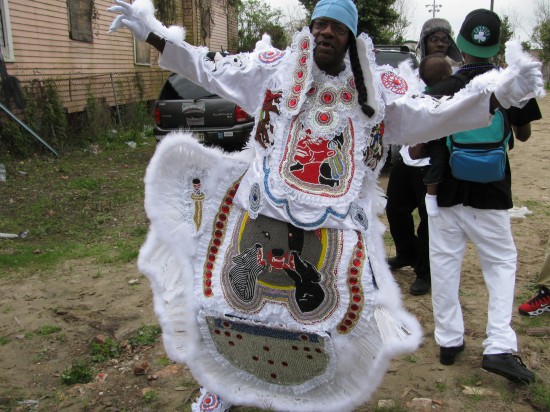 Next up, another Indian tribe, Rex King Of Carnival on St. Charles Avenue, and more….