Submitted by Jaymes Mansfield May 15th, 2011 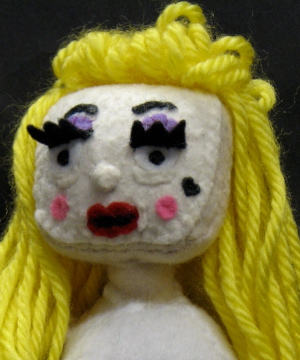 For those of you who liked my Pigmy Will doll I wanted to show some of the pieces I’m most proud of. All of my artwork is inspired by what I was told a “good” artist’s art should never be: camp, kitsche, tacky, and bad-taste. I started making dolls my sophomore year of high school when I was just fooling around with some felt. I needed a project to submit to the art show and my first piece was a dreadful looking franken-doll I lovelingly named Rageddy Pam, but not willing to give up on an idea I dwelled on it a bit and came up with a few patterns that made sense. These were some of my early dolls. Another major contribution to my doll making was the fact I wanted dolls of my favorite older actresses. And it seemed the only pre-1970’s actress that had dolls was Marilyn Monroe. And being more of a Jayne Mansfield type of man this just wouldn’t do. Who settle for Teentalk Barbie or a Tickle-Me Elmo that anyone has when you could have a talking Madalyn Murray O’Hair or Don King? Who wants plan old Marilyn if you could have Mamie Van Doren or the even more glamorous Angelyne(In progress)!So I decided I’d be better off making my own damn dolls. 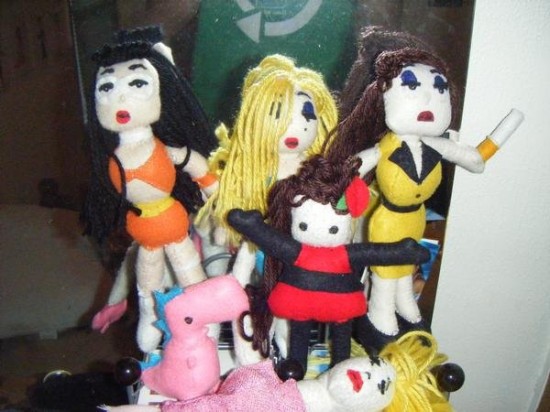 I made dolls of Candice Cascade(A super hero I made up, and drew comics of in math class), Drunk Veronica Lake, Bette Davis, the Rad Dinosaur(A girlfriend’s cartoon I made a doll of for her birthday.), Kate Bush, and my very first hand made doll Rageddy Pam(R.I.P. You lived one of hell of a life, and never looked back… Even when my cat Mortimer attacked you from behind and disemboweled you)

I had become so consumed with making dolls I wanted to see how big I could make a doll. My biggest dolls(At a foot and four inches tall) so far have been Myra Breckinridge(Who sadly was also murdered by my cat.) 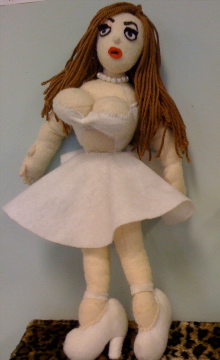 And my best selling doll(My only selling doll) is based off of cult actress, author, mafia moll, and all around goddess Liz Renay. I called it Lady Godiva. I was inspired by Liz’s notorious streak of Hollywood and Vine when she was fifty. 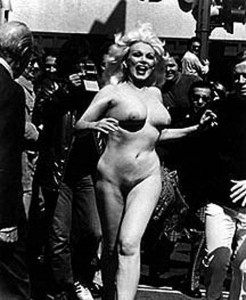 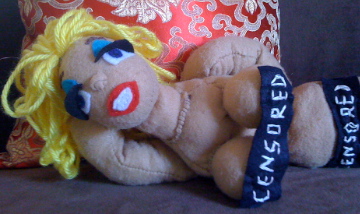 She was purchased by art collector heir to the Pabst Brewery Joe Pabst, who was a lovely man and invited me to the Pabst mansion  to pick out where to put her. I choose a love seat in the main walkway. The mansion was far too top drawer for my taste, so thankfully I had the chance to have the bawdy Liz tie the room together!