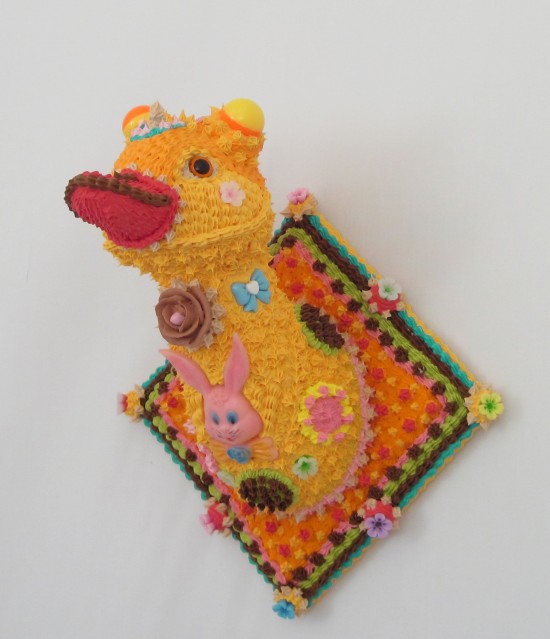 “Bunny Duck-A-Lope Girl”, is an exotic, whimsical creature that represents a composite of a bunny (pink) and a duck (yellow) with little plastic orange and white nubs instead of horns and a faux vanilla icing unicorn horn extending from her forehead. She has a pink faux icing rose on the top of her head worn as a jaunty hat, as well as a caramel colored one at her throat (between two plastic bows) for her bowtie. She is decorated with my handmade faux icing medallions in various colors, and her “feathers” are dotted with lucite flowers. Her eyes are made from lovely brown vintage plastic animal eyes that were made in Japan and that I bought from the venerated, but now closed, Zim’s Craft Supply in Salt Lake City.

All the icing is created from high quality acrylic artist materials, from a formula I’ve developed over the last 30 years, and the colors are hand mixed by me and extremely colorfast. My iced sculptures are a time consuming process as I start by tracking down interesting vintage cake toppers and plastic toys. I then ice the sculptures by layering multiple layers of faux icing over several days, or weeks – and I make all the faux sugar roses, or other faux icing decorations, like medallions, in advance.   She is washable with soapy water!