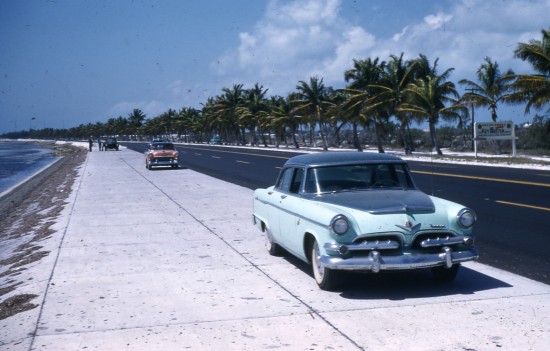 What we have here is my grandpa’s car on Roosevelt Blvd in Key West Feb-March 1956, to continue the old cars posts thing that occasionally goes on here. It’s some form of Dodge tho i’m not sure of the exact model or year. What’s it doing in Key West and not Opelousas? I guess my papa borrowed it for the drive down there. My papa was a Naval Academy graduate and after his 10years or so in the service, stayed on in the Naval Reserve. Every 3 years or so, he’d go down to Key West for reserve duty after 6years on active duty in submarine service out of Key West. Both my sisters are conchs. I came along after they’d gotten out of active duty and moved back to South Louisiana. I did make a couple of those Key West trips, tho not this one, in 1958 or 59 and in1962. I can remember both to a certain extent, the trip in 1962 better than the late 50s one. I have plenty more pictures of Key West, the Keys and the Caribbean from the late 40s-early 50s that i’d one day like to put into book form and maybe post some more here if there’s interest…