Fabio After Dark: Reason Enough to Move to the Sunny Side of Mercury 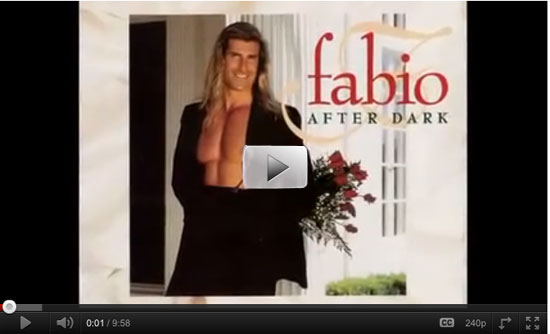 So, I actually have this on CD. I can’t lay claim to discovering it though. About 18? years ago I worked in a little vintage clothing shop. The pay was crap, but I got to wear whatever I wanted (within reason) while I was at work, so I was happy enough. Another woman worked with me once in ahwile and she was truly hilarious. She brought this cassette in one day and I almost died laughing. I had to go right out and get it! I still have the same reaction when I hear it: extremely amused, slightly sick, and generally very yucky. You’ve been warned.

It should be said that the person who did the preceding video did a great job collecting Fabio’s the spoken tracks and presenting them. The shooting stars slay me. The original CD is full of songs by other artists with Fabio speaking all this crap in between…EXCEPT for this next “song”….Can we REALLy call it a song though??? I think it’s more a of a passionate confession set to really well thought out music tracks…  http://youtu.be/KvQhrrHSPsg

4 Responses to “Fabio After Dark: Reason Enough to Move to the Sunny Side of Mercury”