Although when I was in Boston the week before last for the fluffilectable Fluff Festival, all I did was participate in all things Fluff, I did manage to get in an hour of sightseeing, at least the only kind of sightseeing I’m interested in, which is looking for the best and most kitschtastic signs and edifices a city has to offer. I nearly lost my choppers when I came across the Hilltop Steakhouse on Route 1 outside of Boston. This place was so astounding –  from this greatest sign I’ve ever seen, at least 40 feet high and I can’t even imagine what it looks like it night, to the herd of plastic cows grazing outside – that I’m going to give it its own post. I’m shooting for tomorrow but with all the work I still have to get done for my grand performance on the 18th, only time will tell  when I’ll actually get that done. But trust me, it’s coming. 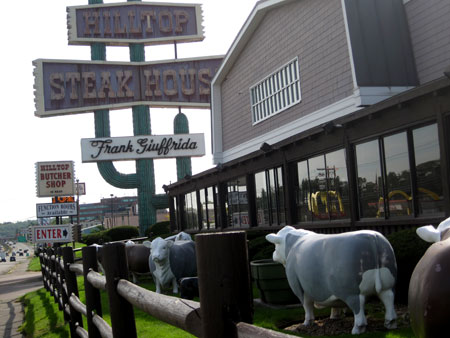 Of course, whenever a name has “hilltop” in it and it’s not on a hill, not to mention that it’s sitting on the side of a flat freeway, it’s astounding kitsch time.

I don’t care where it’s located, any pizza place with a leaning tower is where I’m going to munch Italian. That it’s next door to Giggles makes it even better. I love when plaster flags that are constructed in “blow” motion. 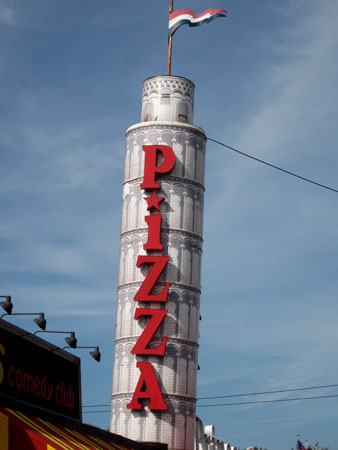 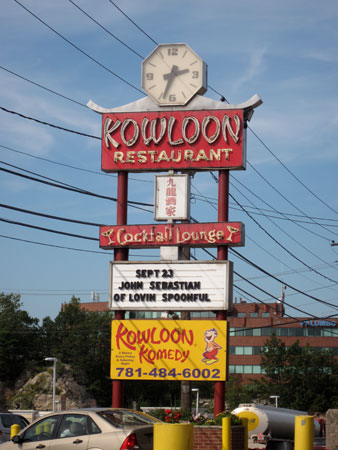 “Cocktail Lounge” and a working clock make it even better. That John Sebastion is performing at a Chinese restaurant, even better. But best of all is the massive hunk of the Kowloon itself: 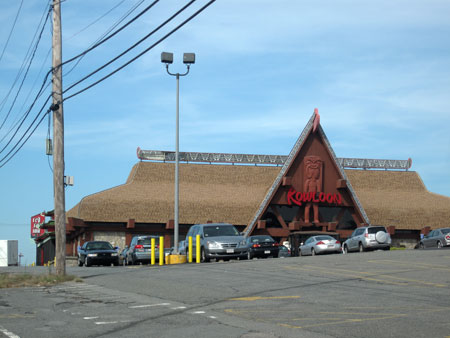 Giant tiki = giant kitsch. If I ever Fluff it up again, I’m going to see if the portions inside loom as large. 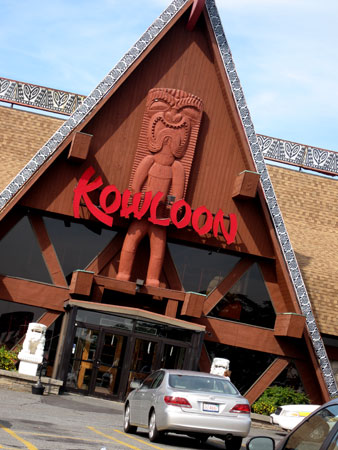 You can’t really appreciate this next sign, especially blocked by that pole. But 15 feet of sake can’t be bad. I love, love, love the Dairy Castle, miniature golf and baseball compound sign, all structures and features of which it beckons you to seemingly untouched since the 1960’s: This angle is great: 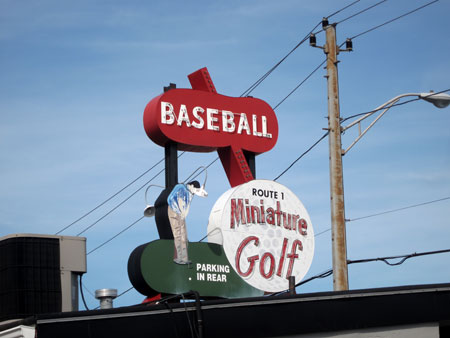 You can spot a rocket ship, dinosaur and this happy Humpty facing the highway from the golf course: 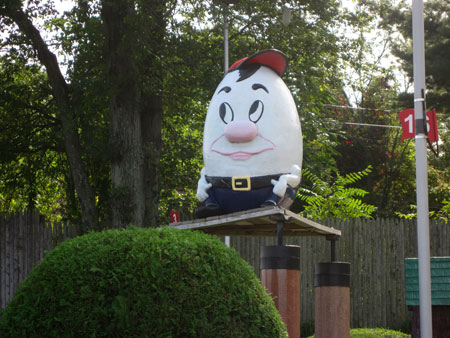 Other than vegetarians, who doesn’t like hot dog signs, especially when an attempt is made at mustard and toppings, and it’s been boiling since 1958? The Karl’s building is pretty great too, almost as if they couldn’t decide on the exact style of architecture they were going for so they went for everything.  Though 1950’s and 60’s are most predominant in the house. And last but not least, Ferns, where you’re lucky if you can get the “new room” – only one? – and a Whir Poo. Though I don’t think I want to participate in anything Poo happening in a motel.