Autumn Means Canning the Bounty of the Harvest. 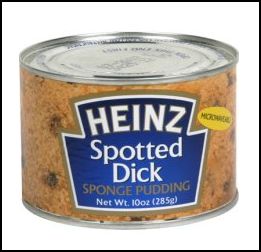 But I don’t remember Grandma canning this.

Actually, Wikipedia says this, and you can’t make this stuff up:

“Spotted dick is an English steamed suet pudding containing dried fruit (usually currants) commonly served with custard. Spotted refers to the dried fruit (which resemble spots) and dick may be a contraction or corruption of the word pudding (from the last syllable) or possibly a corruption of the word dough[1] or dog, as “spotted dog” is another name for the same dish with the use of plums rather than currants. Another explanation offered for the word “dick” is that it comes from the German word for “thick” or dick.”

6 Responses to “Autumn Means Canning the Bounty of the Harvest.”