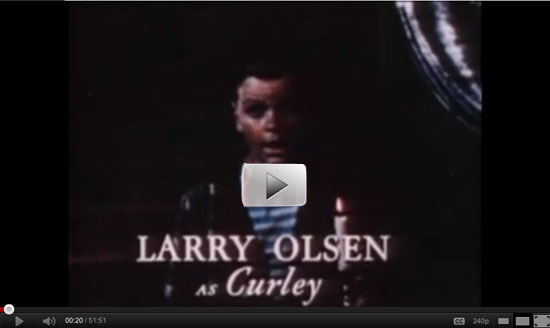 Oh fellow child star, I had wanted to send you some selected highlights of my siblings who are also child stars. There was one short film done by my oldest brother that I found most amusing. Unfortunately evil spirits ate my computer’s ability to edit so I was not able to put that together for your entertainment. However, some lovely person out there submitted the whole film to Youtube only a week or so ago and I can share now. You need only watch the first 35 seconds to see why it was banned from television for being racially offensive. If you can bear to watch the whole thing (I do not expect this)  You will see the madcap adventure includes a CHIMPANZEE who finds the clothes of one of the negro children and puts them on. Of course the little white children can’t tell the difference between an ape and the child. Oh the hilarity!

Surely we are all more evolved than the primates who wrote this. But it is in such bad taste, it’s rather fun and my brother’s pretty cute (he’s Curly).