When I came back from the Korean War, I was given a pass. I was still in uniform in Emeryville (near Oakland) when I noticed the El Rey Buelesque Theater which had a big picture of Tempest Storm and the marque said “Tempest in a T Cup”. I went in and sat at the end of the runway. The baggy pants comedians came on followed by Tempest. She came right down the runway and was standing over me with a great smile! I was fumbling with my camera as I really wanted a picture. She turned and went back to the stage, did her thing with the curtain and was gone. One time a lot later, I was watching Tempest being interviewed  in Reno and decided to write her asking for an autographed picture which she sent me.  I found out we had the same birthday. 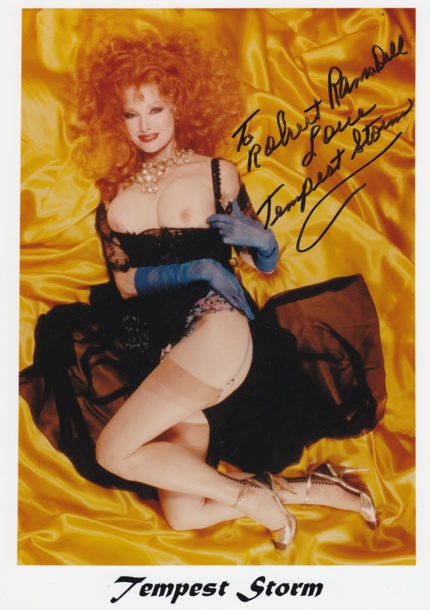 I sent her a birthday card every year for a long time and she sent me other pictures and letters.