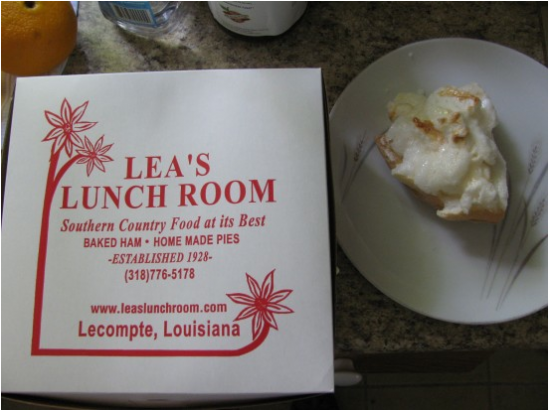 The scene: It’s a lazy Friday afternoon in July, i’m off work hanging out at the house. The phone rings……and the conversation goes something like this…..

Bill: “Huh?!? Lemon! definitely lemon!” (yes it did take a fraction of a second for my mind to register what was going on).

Caller: “I couldn’t remember so i thought i’d call and find out for sure.”

Bill: “Good! So, where ya at and how long’s it gonna take for you to get here??”, he says hoping she’s already there and ready to walk out the door with said pie……..Turns out she had already called her grandmother to ask what kind i wanted and called me just to make sure and that i would be home.

It’s my niece/godchild Katherine calling from her cell somewhere just south of Shreveport. She’s heading towards Baton Rouge heading for New Orleans. She’s been instructed that any time she passes thru central Louisiana, she is to stop at Lea’s in Lecompte(pronounced “La-count”) and to pick me up a lemon merengue pie. She actually listened to me and learned her lessons on this most important of endeavors. It’ll take her about another 3-4 hours to get here so i cool my heels, sorta. It’s hard waiting on a pie from Lea’s. In this first picture above, we have the actual box and a slice of pie. I’d recommend going to check out the website. 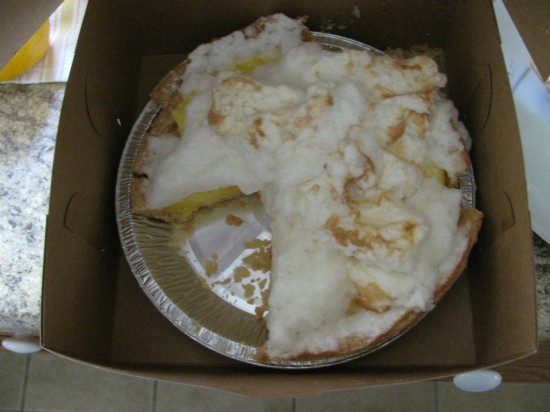 Katherine finally arrives at the house. She pulls out a cooler and the first thing i’m thinking seeing the cooler is “oh no, you didn’t do what i think you did”. And of course she did. Instead of laying the pies flat on the car seat, she put hers and mine sideways in her cooler, thereby slopping the merenge all over the inside lid. Aaarrgghh! That’s gonna ruin the merengue on top!?!! Yes, i did have to scrape the merengue off the lid, but this being a freshly baked pie, it scraped right off and i just sorta plopped it all back on top. Then took a slice out of the pie and put it on a plate(see first photo above). Then got the idea that this would be a great AWMOK post, but only after cutting a slice out of it. Sometimes my taste buds act quicker than my mind……..At least i got a good picture of the box…..

And i’ll end this post with another Lea’s related story. I’d gone to a wedding in Monroe back in the late 1980s, passed thru Ruston for some peaches(it was July and still peach season) and was heading back in the general direction of Baton Rouge. I’ll stop at Lea’s and get a pie for me, one for my papa and drop it off with the folks in Opelousas on the way back to BR .I get to Lea’s on a hot Sunday afternoon, go in, enjoy a slice of pie and a coke and am feeling good about everything. Then i get out to the car and realize i don’t have my keys in my pocket. Panic sets in. Then i see the keys in the locked car. Bill then learns how to break into a 1982 Honda Accord without breaking the window with the assistance of someone who’d done the same thing and knew the trick. Only at Lea’s……..