ON his recent visit to Coney Island, Sock MOnkey decided to stroll up the boardwalk to Brighton Beach. He simply couldn’t leave without at least visiting Brighton Bazaar! Too bad it’s always too crowded in there to get good photos! But the walk was lovely, especially because Sock MOnkey was with a terrific host and most beloved friend. Along the way, he couldn’t resist hanging out with some of his sea creature pals in front of the aquarium. There’s nothing like a friendly octopus tentacle when you need to sit down and have a rest… 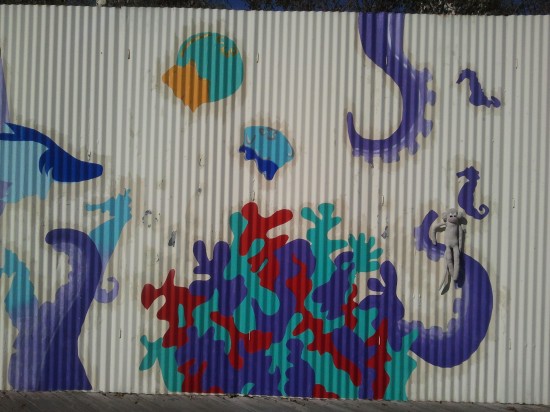 And swimming with the rays is sooo relaxing! 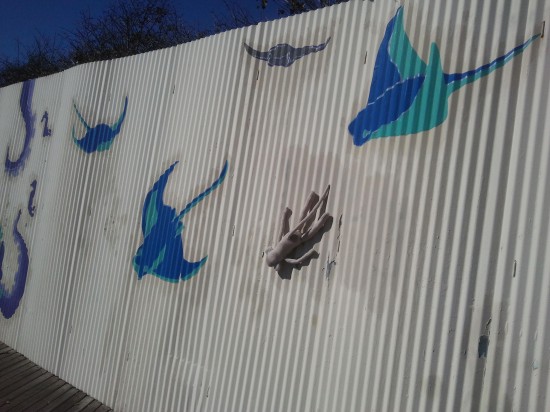 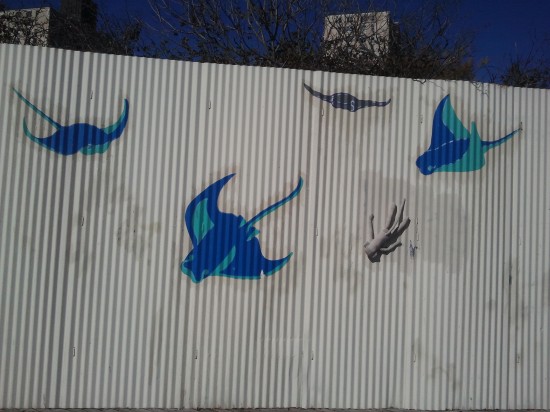 In fact, 4 little boys came running up the boardwalk to watch you swim! They screeched with delight when they saw you but wouldn’t let me take their picture. I’m not sure if they could have held still long enough anyway, but I did get them running away…SO nice that kids have a place to run and play like that! It made my day when they all ran off yelling, “by crazy monkey!!!” 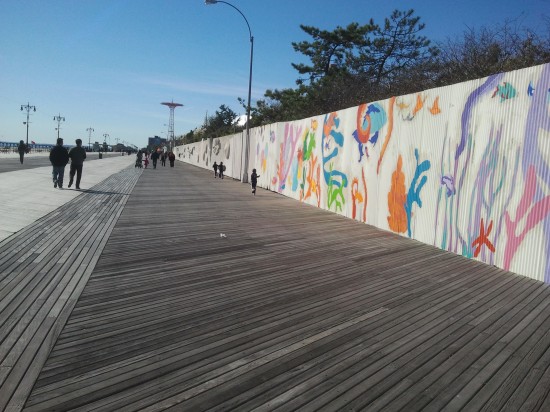 After a nice swim, it’s always wonderful to enjoy some reflective moments while gazing at the ocean. It’s one of my favorite things to do too. Of course, it’s easier for me to enjoy the peace though, because I’m not a celebrity like Sock Monkey. Here comes a fan, walking right into the frame…Luckily Sock Monkey’s handsome body guard is watching his back… 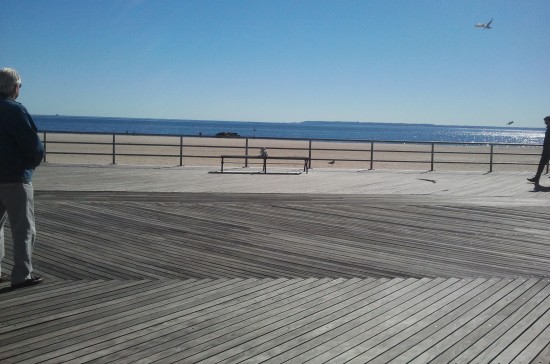 Yep, you’ve been noticed! Get used to it, Sock Monkey! It’s the price you pay for so much public adoration! 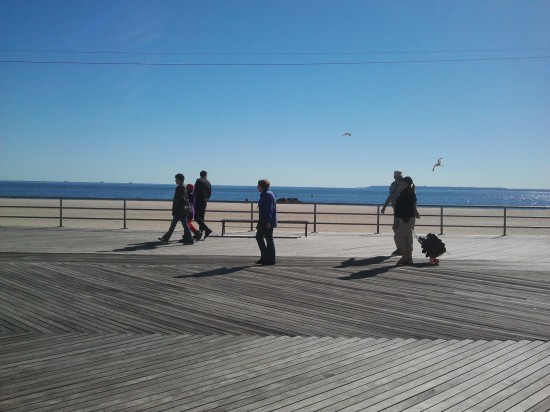 Of course they couldn’t resist the chance to meet you. I’ve felt that away before too. It’s embarrassing, but life is short, so you shouldn’t hold back. You never know what nice things might happen. You might make some new friends! And your body guard isn’t worried! He walked away laughing! 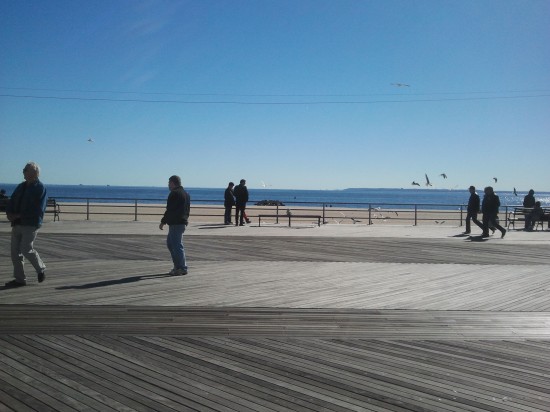 What harm is there in having a photo with a strapping young gentleman? None that I can think of! In fact, maybe I’m getting a little jealous! I heard him say that the photo had to look really serious, which is hilarious. He approached the situation with an artistic vision. I think he definitely belongs on the AWMOK roster! I hope he joins! 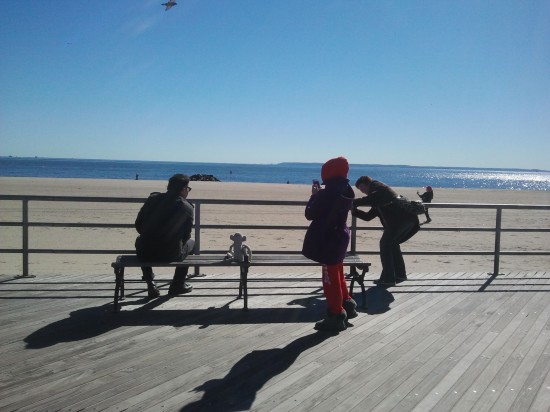 And it’s nice that the whole family got to have a portrait. Someday they can tell the grandkids about their incredible celebrity sighting! I met them after their photo shoot and encouraged them to become AWMOK members. We need more people like them! 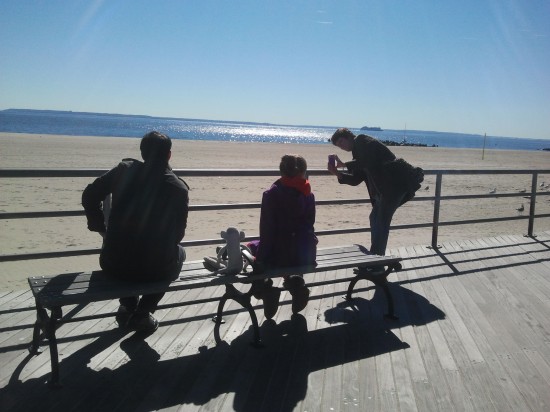 Of course, no matter what, the photo below remains Sock Monkey’s favorite picture (possibly ever). When he is so far away in boring California, he can look at this and return to his happy place. Thanks to his beloved friend, escort, body guard and fellow cheese blintz lover, this day will live in his heart forever. And for the record, this friend of his happens to be the incredible and incomparable painter and artist extraordinaire, David Keeton. He wanted me to say “known unsuccessful artist, David Keeton” but I can’t ever agree to that. When you’ve spent more than 40 years creating hundreds of incredibly beautiful and complicated works of art, you are entirely successful. It has nothing to do with cash and recognition. In fact, how something as inane as money ever got so entangled with something as important as art, is beyond me. Money doesn’t mean a thing and no amount can hold a candle to a great work of art, a fabulous song, a walk in the park, laughing with your friends and being with people you love. So in that respect, David and I are two of the most successful people I know! Of course, I should say this too: David, if you want to sell things, you have to actually SHOW them to people! I’m not saying you should (continuing to create is the important thing) but sharing (whether or not for profit) is a wonderful thing too. Where would we be if say, someone like Bud Powell decided he didn’t want us to hear him play? Or The New York Dolls had had a personality crisis behind closed doors?! Or Danny Kaye had been an introvert?! What if Allee Willis were a hermit!?!?! All horrifying to consider, if you ask me! It’s a great gift when artists share things, and I know it certainly makes my life better! It’s one of things I am eternally thankful for. That ‘s what is so great about the AWMOK. We hang out, we laugh, we share stuff and spread the love….nothing better than that…it’s such an honor to be a part of it all…. 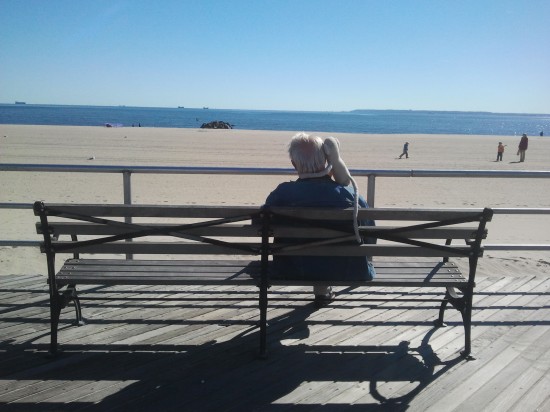