This is the sad post. The last day in New York is not the thing that Sock Monkey wanted to confront, but it had to be done. What could he do but steep himself in the wonderment that occurred in the 7 short days he was so lucky to spend in his favorite city? It was a day of sweetness and ok, wallowing. He saw the Tatzu Nishi exhibit by accident thanks to a kind stranger, he spent a few all too brief moments saying “see you soons” to friends and of course, filled his heart and his mind with sounds so transcendent, they could only come from Smalls Jazz Club. I confess that I, his handler, was quite sad to leave NY and  am weaker than Sock MOnkey, so was glad when he took the reins and had the good sense to remember that Smalls was just a 1 train ride away. What a memorable night. For once we weren’t sitting thousands of miles away streaming dreams. There were some fantastic musicians there. And we were sad to leave so early as things were just getting started round about 11 pm… 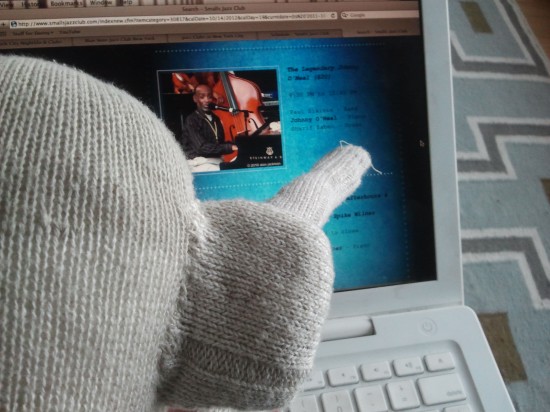 Here is Sock MOnkey on his last train ride, returning from his late night romp at Smalls. The subways are VERY bumpy and full of terrifying germs. Boy does he miss them. That rattle and rumble puts him right at ease. The shear shake and shimmy of it all was captured here. 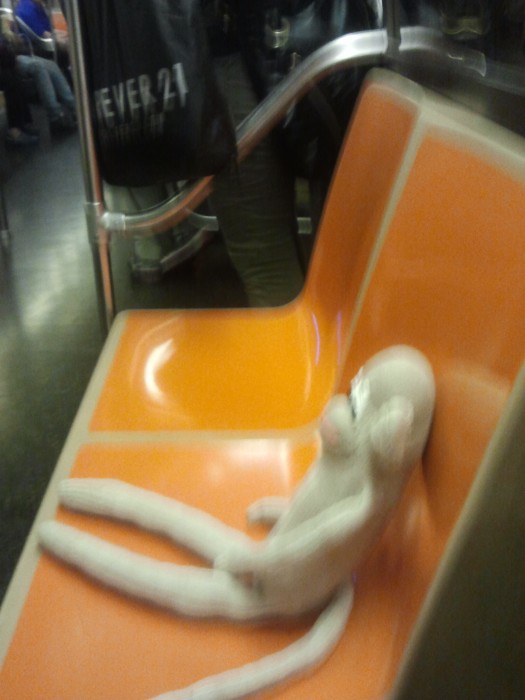 It’s a bit of a plane ride, so earlier that day, we both needed to get in some exercise and what better way than to walk briskly through our beloved park? Of course, though, in the interest of full disclosure, it was not so much of a fast paced walk but more of a lazy and somewhat heavy hearted stroll that was shrouded in weepy sentimentality. Sock MOnkey can sometimes be dramatic. He’s a thinking man’s monkey, but still very emotional. Still, he needed to get his blood flowing, so I encouraged him to at least have a romp in a luscious New York tree. He did. 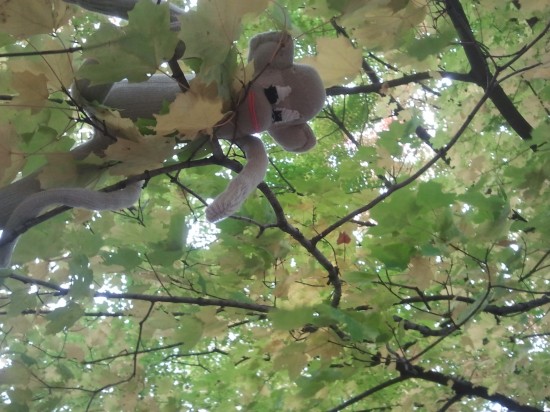 What a great tree…. 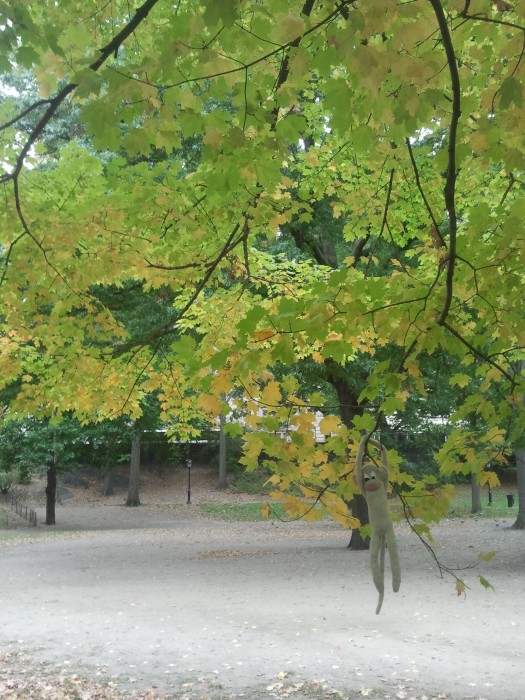 To be honest,and since we are already whining, Sock Monkey was disappointed to be leaving before the leaves changed into their incredible autumn hues, but I reminded him that he was at least there for the first ones to morph. He felt better after that. Autumn is his favorite season, so he was glad that he could feel the air whispering in its arrival even if he couldn’t stay for the whole event. 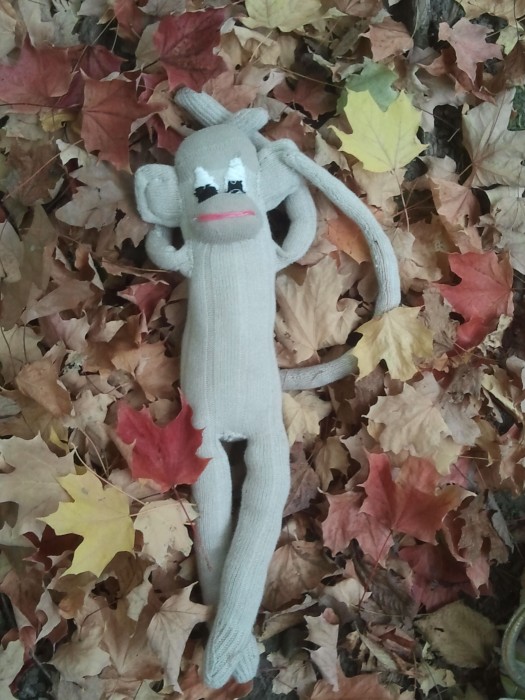 And though I feel strongly about leaving nature where it lays, I did permit Sock Monkey this one exception. And he chose wisely. What an impressive color pattern on this turning leaf! I kept it for him in our paper archives so he could reference it when he needed to…Oh, OK, I sneak peaks at is as well. Especially when I’m feeling maudlin. He then tried to convince me to skip the plane ride all together and follow this lovely path to another world. It sure was tempting. But, there were too many things (meaning homeless cats and that little problem called unemployment) at home that needed our attention. So, Sock Monkey took one final sun bath on the rocks. 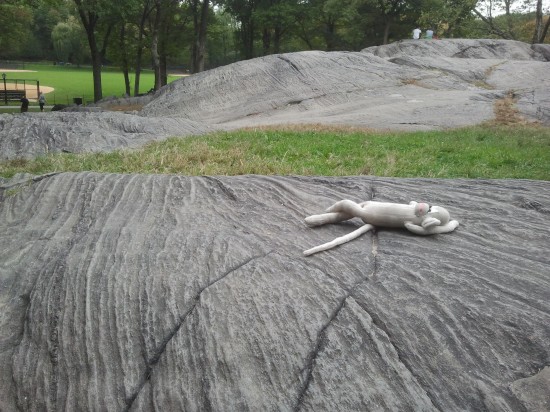 After that far too ephemeral bit of loveliness, he returned to his unfathomably luxurious, sky-scraping palace and had himself a good cry. I don’t know why Sock Monkeys aren’t supposed to cry, because ya know, they do. He wasn’t just sad either. Sock Monkey never gets a case of the “Why Me’s” unless something extraordinarily wonderful happens and well, he had too many of those happenings to count while he was in New York. Sometimes he cries because he’s so blessed and he knows it. He doesn’t question it much anymore, because he’s never found an answer but he never forgets it. Not for one moment. He couldn’t even hold back on the way to the airpot. It didn’t help that a warm rain had begun to drape itself over beautiful New York. When the whole city is blanketed in raindrops and a silvery light makes everything shine more, and friends are texting their sweet safe-travels, well, it gets a Sock Monkey, his handler and a lovely, and kind cab driver right in the heart. Sock Monkey wanted me to make sure I mention that he was and is thankful for the gentility of said driver. Right up to the last minute, we were lucky to spend time with the kindest of people. It’s no surprise, given the geography. So, what can we say but, THANK YOU BEAUTIFUL NEW YORK and yeah, WE ❤ YOU.