As I think after the recent events we can all need a little lift up I would like to introduce some of my handmade (crocheted) Aliens to you.

I started this project called “Adopt an Alien – Everyone is Beautiful”  in 2009. I’m giving the little fellas to friends and also sell them in my shop, the mission of my aliens is to spread happiness and to show people that it’s okay to be different and no matter how you look or what you like – there is nothing that’s not to love!

Every Alien I make is unique and they all come with different hobbies, likes and habits.
Here I picked a few all out of the many many aliens that got adopted from people from all over the world already:

This is Lena. Lena comes from planet Olmoz, claims she is a protozoon, but she isn’t. She likes fancy skirts, salsa dance parties, books about molecular dynamics and her favorite band is Tito & Tarantula. She eats pizza and bananas ONLY (all kind of veggie pizza though). She is very proud of her single tooth. “My toof iz a symbol of my individuality.” she says.
Lena is adopted already. She just received her license to fly a Spaceship and is currently on her way to Regensburg/Germany. 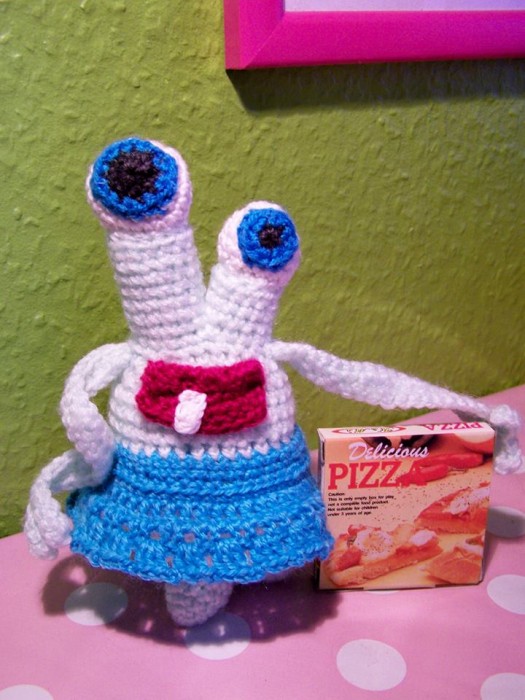 This is Milly. Milly comes from planet Olm. She´s very talkative, laughs a lot and loves to ride rollercoasters cause it makes her scream.
She likes mexican folk music, her favorite food are bananas and strawberries. She also likes sniffling on highlighters.
She got adopted by a dog in Finland where she leads a very happy life since. 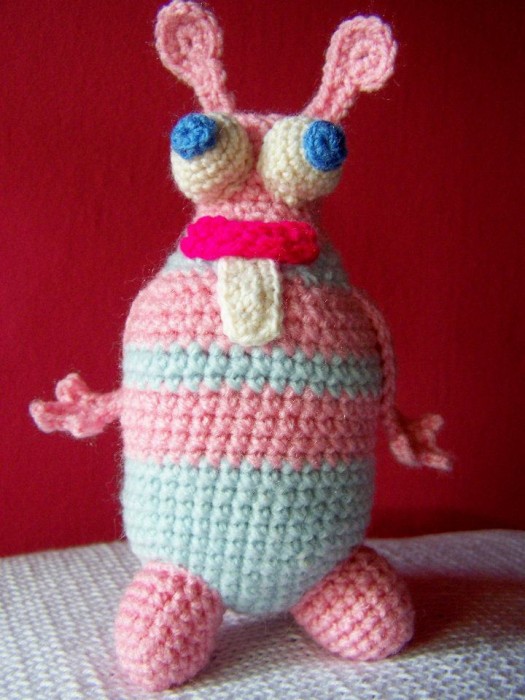 These are Osmond and Ross, which got adopted by my two nephews who included them in a presentation about acceptance in school. 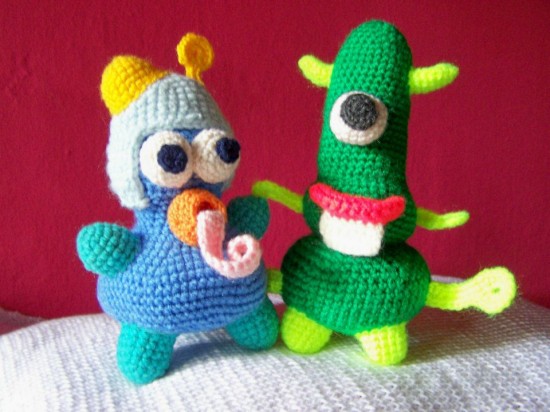 This is Bruce. Bruce comes from Planet Lurz. He likes popsicles, peanuts and strawbery-lemonade (preferably with a straw).
Bruce loves to watch old movies with Elvis Presley and also loves karaoke. Bruce got adopted by a wonderful woman who lives in Berlin/Germany. 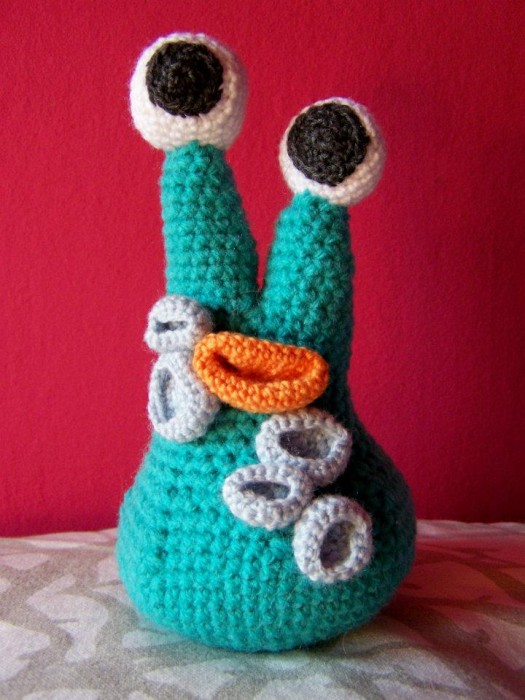 This is Ozzy. Ozzy comes from planet Gulp.
He likes everything he can lick on, like popsicles, lollies and doorhandles.
He´s member of an Ufo-Tuning Club and is collecting photos of colorful insects. Ozzy got adopted by the same family like Bruce above. This is Little Winni who got adopted by our fellow Akitschionado Big Winni. He’s a fan of Lederhosn and his hobbies are visiting beer breweries and liquor stores. He’s also strangely attracted by street hookers (but he’s only looking). 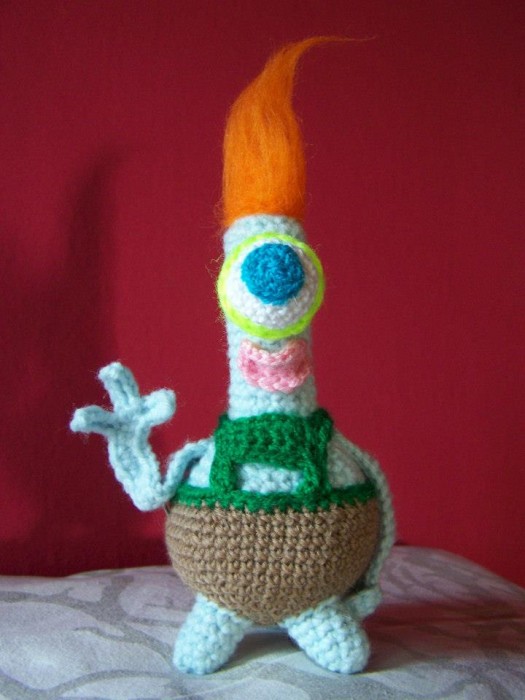 This is Moira. Moira comes from planet Ulk and her hobbies are Bingo and Tele-Tennis. She likes music from The Ramones and pink lipstick, cause it brings out the beauty of her single tooth. When you hide a marshmellow she can detect it by telepathy.
She got adopted by a friend who lives in Miami/Florida. 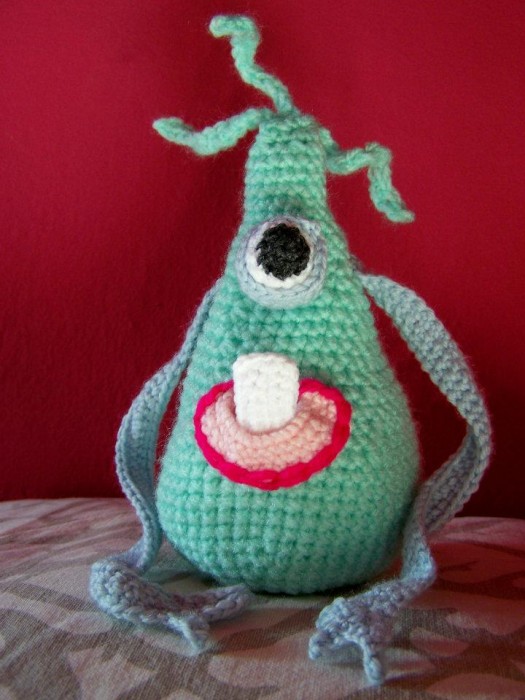 This is Albert. Albert I donated to a fund to help a dear friend to raise money for a palate surgery she urgently needed.
The highest adoption fee (bid) came from Australia where he’s still living up to today. This is Stella. Stella comes from Planet Spux. She´s a devoted fan of David Bowie, likes car-rides and is collecting pens, which she grabs with her tentacles when nobody is looking.
Vegetarian Alien who likes candy. Stella moved to Florida two years ago and became a professional co-driver. 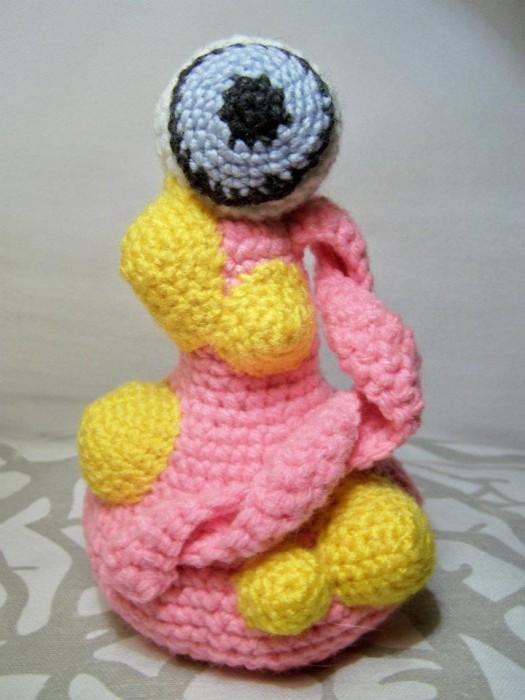 This is Jack. Jack comes from planet Momp. His hobbies are painting turtles and collecting empty perfume bottles. He loves to read Science Fiction stories written by humans (he finds that highly amusing) and likes polka-music. He got adopted by a loving couple in La Mesa/California. Last but least the very first Alien I made.  His name  is Kurt. Kurt comes from planet ChomChom and is five years old. Kurt´s hobbies are curling and taking photos from extraterrestrial mushrooms. He´s a devoted fan of Barbra Streisand and takes very good care of his teeth.
He also moved to Miami/Florida in 2009. I hope this post, wherever you live, made your day a bit more colorful and gave you a smile.

Cause that’s why I started this project :)

3 Responses to “Project “Adopt an Alien””