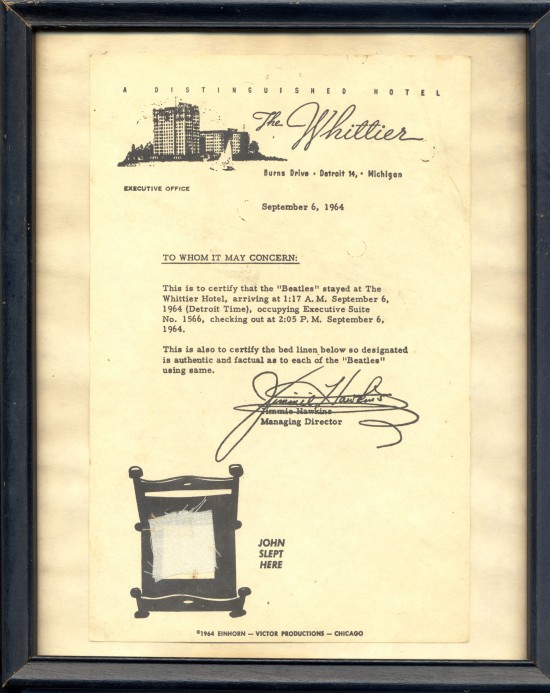 Given Allee’s hometown Detroit connection, I figured this would be an appropriate first submission to The Allee Willis Museum of Kitsch: This framed document from the “Executive Office” of The Whittier Hotel in Detroit features a 1″ square of fabric cut from the bedsheets of a room the Beatles slept in during their first tour of the U.S. in 1964. The small sample of sheet is glued to a graphic of a bed – and this one is designated as having been snipped from the linens of John Lennon. The letterhead proclaims The Whittier to be “A Distinguished Hotel” – although that’s certainly called into question by the sheer fact that they chose to sell the bedsheets of their celebrity guests. The certificate reads as follows:

This is also to certify the bed linen below so designated is authentic and factual as to each of the “Beatles” using same.

It turns out this enterprise was the brainchild of Richy Victor and Larry Einhorn, two employees of WBKB television in Chicago. Victor and Einhorn came up with the sheet scheme to cash in on the raging Beatlemania of the day, making a deal with The Whittier to buy the Beatle bedlinens for $400 when the lads checked out. “We told ’em to plug the rooms up as soon as the Beatles left, seal ’em up like a murder scene,” recalled Victor in an interview 20 years later. The two men traveled to both The Whittier in Detroit and Kansas City’s Muehlebach Hotel with lawyers and witnesses, getting signed affidavits from the hotels that the Beatles had indeed slept in the rooms. Then they cut the sheets into 164,000 little squares, randomly assigned each piece to John, Paul, George or Ringo, and attempted to market them to collectors and fans. The get-rich-quick plan was a resounding failure, however, as the two men received less than lukewarm enthusiasm from potential buyers, as well as cease and desist letters from the Beatles’ lawyers. “We sold between 700 and 800 of the pieces of sheets,” Richy Victor admitted. “We lost money. We didn’t even get back what we paid for the sheets.” At the time of the newspaper interview in 1984, Victor still possessed plenty of the Beatles sheet scraps. “Bags and bags of them,” he bemoaned. “I keep them in shopping bags. They’re going to be with me for the rest of my life.”