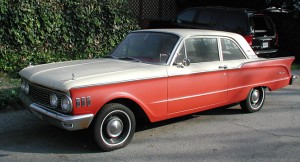 This 1961 Mercury Comet belonged to a friend of mine who lived in my guest house. The car was parked in the street outside of my house for a couple of years when he was not driving it. In 2006, I got the car hired to be in the Jake Gyllenhall/Robert Downey Jr. film, ‘Zodiak’ which was released in early March of 2007. It could not have been a better match, including its color scheme. The Comet is coral and off-white and, in the film, the Comet was parked next to a vintage trailer (in the kitschy vintage trailer park) that was coral and off-white in color. See next Post for picture.