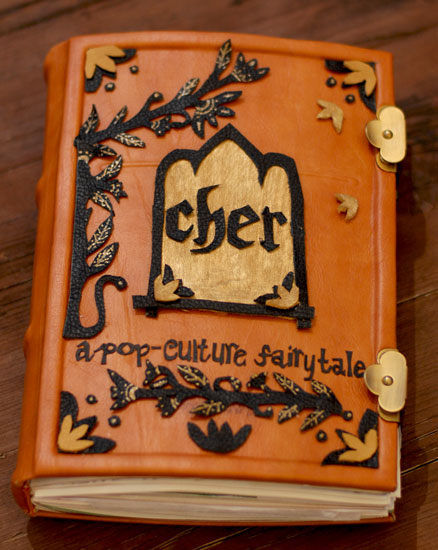 Almost a year ago, I was lying in bed with my Chihuahua Schmoopy, suffering my first big Hollywood heartbreak. The animated short I created and directed for Disney TV Animation wasn’t going to be picked up for a series-despite the “off the charts” testing scores for tween girls!!!

I had started work on my short immediately after graduating from the Experimental Animation department at CALARTS where my unique style of animating cashmere cutouts mixed with construction paper backgrounds was all the rage.

Anyway, this girl who thought she was a major hot shot got shot down in a major way, and it was brutal.

Even though, I had been raised by New Age Valley girls, I so could not see the “Divine Design” in “The Universe’s Plan”, I didn’t even want to shop anymore. So I was lying in bed, watching TV, doing my Emo-girl thing, not wanting to live when I saw a Biography on Cher.

Growing up in the 1980’s and 90’s I never knew anything about Cher’s life before “Mask”. I only knew she was this serious actress and singer who liked to wear g-strings with leather jackets and whose name when spoken made everybody go “Ooooh‚Ä¶” But I really didn’t know the history behind it.

Watching that Biography I was like “Holy Crap!” I was both excited and pissed off. I couldn’t believe that I never knew how totally cool Cher was and this started me on a journey.

I gave myself a Cher education and let me tell you, being a Cher fan is never boring.

With my new false eyelashes procured at the MAC Counter, my Egyptian-style eyeliner and beaded headband, I discovered all of Cher’s music, saw all her TV shows available on DVD, fell in love with all her movies like 1969’s “Chastity” (Why didn’t she get an Academy Award for that?!) and I flipped out watching 40 years worth of fabulous Cher Youtube clips.

But more than any of that stuff, I was most profoundly inspired by Cher’s autobiographical book “The First Time” (As Told to Jeff Coplon). This book should be required reading in all public High Schools across America. (Are you listening Obama?…Oprah?)

Seeing all these old pictures and footage and reading her own words about her life was such a trip. I mean when you are used to somebody being serious your whole life and playing a mom, then suddenly you see them laugh like Goofy or dressed up in a Raggedy Cher costume acting completely silly…at first it’s scary, you don’t know what to think, but then it’s so rad. Cher became even cooler to me.

Cher is a mix of an untouchable Icon and your best friend since second grade and that’s why she is so relatable and inspiring. Her story reminds us that dreams do come true.

If there are any modern day fairy tales, Cher’s amazing and stylish true story is it. I wrote and illustrated “Cher, A Pop-Culture Fairy Tale”, because I feel very strongly about sharing who Cher is with my generation and all the rest that follow.

My illustrations are done in the same style, with the same materials and with the same sense of fun I’ve had since I was four. And I suppose that’s why they are so kitschy. I used construction paper, crayons, markers, colored pencils and a splash of glitter.

The cover is done in traditional fairy tale style complete with golden claps and my own interpretation of Cher inspired leather cutouts.

I am way honored to have excerpts of my piece a part of “The Allee Willis Museum of Kitsch”. I want to thank Allee from the bottom of my heart for her years of support!! XXXO

I also want to thank Cher for being a “day-vine” fairy tale heroine! You helped me get my ass out of bed and start creating again and I am really, really grateful for that! Thank you a million times! XO

I hope that everybody who sees my work digs it, especially Cher fans-I had you in mind the entire way!!

Thanks to everyone for checking out my work!!

Peace, Love and Fabulousness to All,

12 Responses to ““Cher, A Pop-Culture Fairy Tale” Written and Illustrated by Lauren Duarte”