this is my confession.

Some weeks ago, I was lazily listening to the radio, when I heard the German band Randy Pie playing a song with a title that would have pleased our friend Allee Willis => But suddenly, horrible crackling noises came from the loudspeaker! I looked behind the radio and oh! => Yeah, a Cat (Hello Kitschty) was stealing a vacuum tube! She chose the Magic Eye tube EM84, “because it’s green and shining“, she said. She might have some kitsch blood in her veins.

The radio providing no sound anymore, I took it as a sign: I had to go back to playing music and record a new single, that would be a big hit everywhere. Planning to turn on my (fake) Stratocaster, I first picked-up my mediator‚Ä¶ => 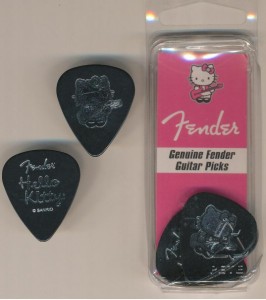 But when I was about to take my guitar to show the world that somehow I might be the reincarnation of Roland Bautista, what a surprise: ‚Äòsomeone’ was already playing => 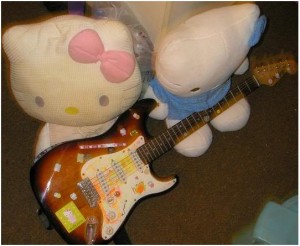 (Look carefully at the picture, that’s what we call “unplugged”)

OK, ok, dear Cats, keep on playing. I changed my mind: my new single will be only keyboards-oriented. When I was about to plug my old string machine, I feel an eye staring at me. “Stalker?! Stalker?! Who are you?“. I turn on the light and ouch! A big big cat is sitting at my keyboard, looking at me in a menacing way that only the pic below can describe => 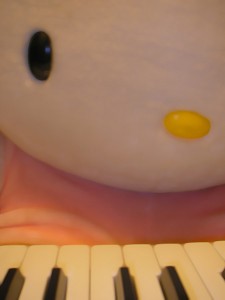 I ask her if I can play, the answer comes as no surprise: “No way!”

Me: -How can I record my single?

I knew I had no choice. This would be the next Milli Vanilli scandal, Gilles Snowcat doesn’t play on his records, he has ghost players named Hello Kitty, I can already imagine the disappointed fans. But Kittychan is strict as hell.

Guided by a little friend of hers, she started playing => 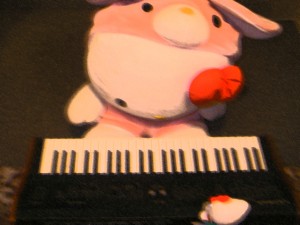 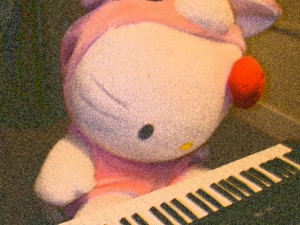 Me: -Write a good song then!

Me: -Allee Willis? Give me kitsch sounds too!

Gosh, the MT32 is currently being decorated by another Cat. She puts stickers of herself on my good ol’ sound module! Me: -Well, well, I want the single to be disco, let’s put the rhythm on! Can anyone turn the drummachine on?

The Cat: -No need, I’ll play the drums. My friends call me Keith Forsey! => 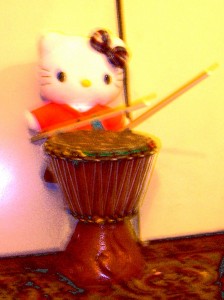 And when I ask for some more synthesizers, guess who help me? The Cats! Again. => So, finally, I could release my disco single. Kitsch, have you said kitsch? => Well, I have a secret to share with you. Sure the Cats played all, but they made such a mess that I had to ask my friend the Bear (Kuma san) to play some overdubs.=> 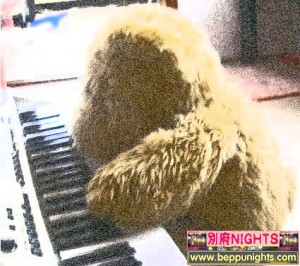 But don’t tell the Cats, they would get easily angry if they knew! And when they’re angry, how frightening they turn out to be. => 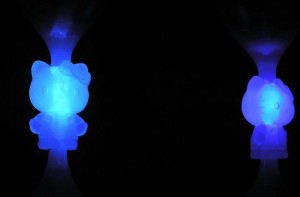