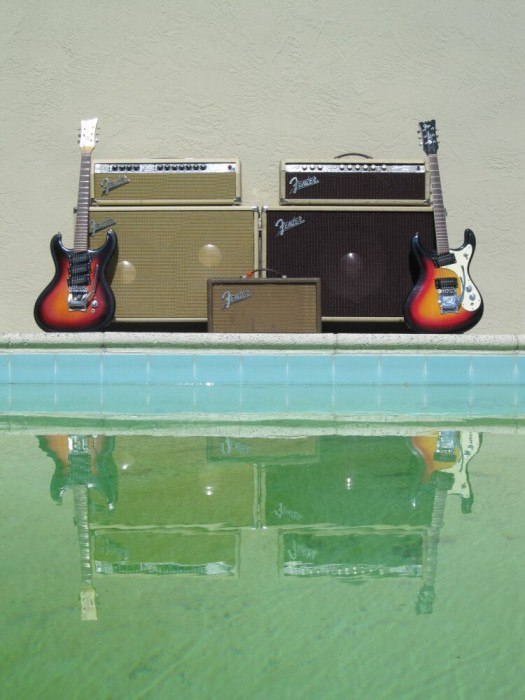 Not kitschy pre-se, but the tools with which kitschy music is made. Here we have, from left to right, a 90’s era Mosrite V3, a ’67 Fender Twin Reverb (installed in piggy-back cabinets to make shleppin’ easier), a ’63 Fender Reverb, a ’63 Fender Showman, and a ’66 Mosrite Ventures model. From the era when bands aspired to matching equipment, matching uniforms and synchronized dance moves, this is the gear that makes the “Surf” guitar sound.

The Showman Amp is at the heart of my personal guitar sound. I was lucky enough to find it in the early 90s through the then new-fangled internet. I had searched all over New England for one to no avail, so I wrote to rec.music.makers that I was looking for a Showman. A guy in Vancouver, BC wrote and said he had seen one in the local swapper magazine, and if he hadn’t thrown it out yet, he’d get me the info. A week later he gave me a phone number. I called, and the owner was thrilled to find a buyer for the junky old thing. I got it, put in a fresh set of tubes, and it’s been surfin’ away ever since.

One Response to “Play that kitschy music…”