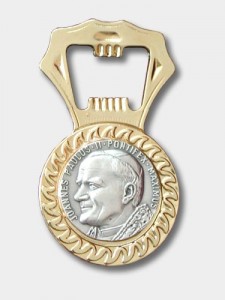 The Popener is a bottle opener that features the image of Pope John Paul II. It the essence of kitsch…that perfect blend of a figure of eminence with a mundane item of everyday utility. As far as I know, it is only available at a souvenir shop just outside the Vatican in Rome. If anyone is planning a trip to Rome, I would love to know if they are now selling Pope Benedict XVI popeners. Just go to the Galleria Mariana on the Via di Porta Angelica and tell them Tacky Julie sent you.