Money From The Sky 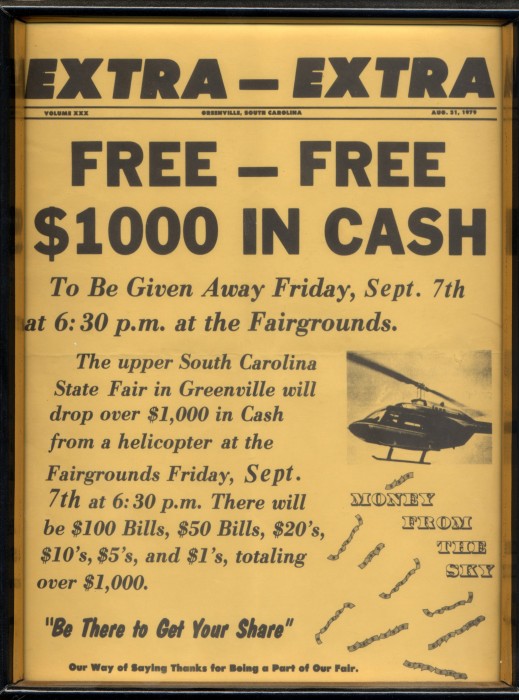 When I was 13-years-old I flew in a helicopter for the very first time and threw hundreds of ping-pong balls stuffed with money out of the copter’s open door into a rather large crowd of people eagerly gathered in the infield of my father’s NASCAR racetrack, the Greenville-Pickens Speedway in Greenville, South Carolina. This was a “Money From The Sky” promotion for dad’s annual Upper South Carolina State Fair extravaganza (which to this day still continues, usually starting the Thursday after Labor Day for 10 days), and earlier that afternoon I had assisted members of my family in slicing open these plastic pods (with whatever amounted to an Exacto knife back on August 31st, 1979) and stuffing them with cold hard cash.

My mom, who was managing the main office up on the fairgrounds, would’ve completely freaked out if she’d known I was angling to even go near that helicopter (which was a virtual rattletrap, its good ol’ boy local pilot by no f***ing means qualified to swoop up and down in twisting, turning arcs over a crowd of human beings in a grandiose movie-stunt-like fashion), but my dad gave me the go-ahead on the sly, and I excitedly boarded the buzzing bird with my large cardboard box full of table tennis treasures.

The ride was indeed somewhat terrifying, yet also exhilarating and downright enlightening, as the frenzied folks below raced around willy-nilly, hoping to catch my tossed out ball-encased bills ranging in denomination from $1 to $100. It was all uncannily akin to one of those aerial shots from that very era’s “Mutual Of Omaha’s Wild Kingdom” where the caribou or buffalo (or whatever might’ve been that week’s featured animal), stampeded back and forth in panicked herds, as Marlin Perkins provided the narration. (I also couldn’t help but think of that previous Thanksgiving’s episode of television’s “WKRP In Cincinatti,” in which nerdy newscaster Les Nessman broadcast dramatic Hindenburg-esque commentary as he witnessed the radio station’s ill-fated helicopter-turkey-drop promotion.) The main image that sticks with me is a relatively well-dressed guy who dove face-first into an infield ditch full of mud from a recent rain – then him standing up, dripping with filth, and examining his little white orb in anticipatory glee. I remember very much hoping that he’d caught a hundred rather than a mere one.

This ping-pong promotion was so successful that my family did it again at the fair the next week. On that occasion I opted to run with the humans rather than ride in the helicopter (just to get the full perspective), and that day I managed to snag a single ball from the sky. I distinctly recall leaping up from the manic crowd and catching it – just behind the concessions stand, a little to the right of the racetrack pits – as if it was all on videotape. Thirty years later and counting, I still have that ping-pong ball and the $20 bill that floated down with it.

3 Responses to “Money From The Sky”