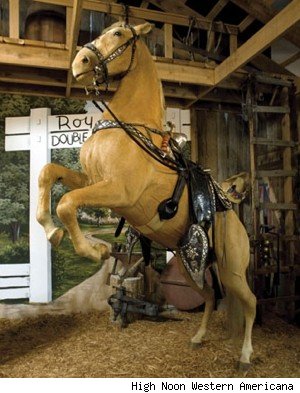 A part America’s childhood is on the auction block: “Trigger.”

His original name was Golden Cloud and he was born on a ranch in San Diego, California in either 1934. His first movie was in 1938 Maid Marion’s (Olivia de Havilland) horse in The Adventures of Robin Hood. In this same year, Roy rogers changed his name to Trigger for their first movie together, Under Western Stars. Rogers eventually purchased his co-star for $2,500 in the late 1930s (roughly equivalent to $30,000 today).

“He would turn on a dime and give you 9 cents change.” ‚ÄîRoy Rogers

Trigger became known as “The Smartest Horse in the Movies” performing some 100 recognizable tricks: counting, doing the hula, untying ropes, shooting a gun, knocking on doors, and walking on his hind quarters. The horse was outfitted with an exquisite Edward H. Bohlin gold and silver saddle and was even the focus of the movie My Pal Trigger. His hoof print is in front of the famous Grauman’s Chinese Theater in Hollywood and he was lauded with many awards. Roy and Trigger also raised millions in the sale of war bonds during WWII.

Trigger died peacefully in 1965 and was mounted in his famous lavade position. Along with Dale’s buckskin horse “Buttermilk” and “Bullet the Wonder Dog,” Trigger graced the Roy Rogers-Dale Evans museum in Branson, Missouri until its closure in 2009.