Here are two lovely one ounce mini-bottles from the House of Koshu “Rainbow Set” of flavored Japanese liqueurs from the ’60s, featuring wooden Kokeshi-style doll heads. I have the Sakura (cherry liqueur) and the Mizuiro (blue curacao), but evidently they originally came in a seven-bottle boxed set (as seen in the pic below found on the net), which also included Mikam (mandarin orange), Banana (banana), Reishu (melon), Midori (menthe), and Sumire (violet). Apparently these seven-inch mini-bottles from the House of Koshu “Rainbow Set” were also given out back in the day to travellers flying first class to Japan. 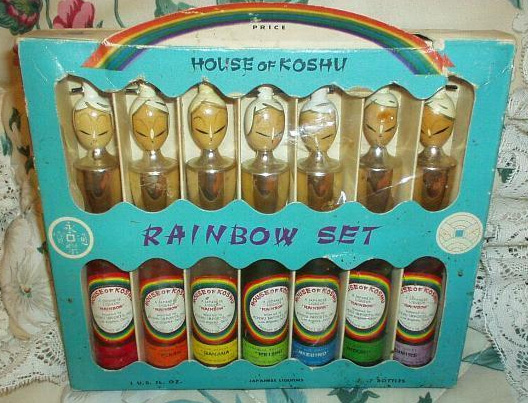