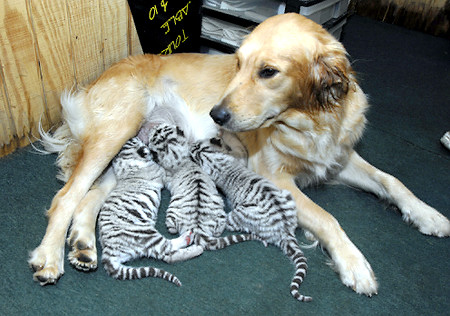 CANEY, Kan. ‚Äî A dog at a southeast Kansas zoo has adopted three tiger cubs abandoned by their mother. Safari Zoological Park owner Tom Harvey said the tiger cubs were born Sunday, but the mother had problems with them.

A day later, the mother stopped caring for them. Harvey said the cubs were wandering around, trying to find their birth mother, who wouldn’t pay attention to them. That’s when the cubs were put in the care of a golden retriever, Harvey said.

Harvey said it’s unusual for dogs to care for tiger cubs, but it does happen. He said he has seen reports of pigs nursing cubs in China, and he actually got the golden retriever after his wife saw television accounts of dogs caring for tiger cubs.

Puppies take about the same amount of time as tiger cubs to develop, and Harvey said the adoptive mother just recently weaned her own puppies.

“The timing couldn’t have been any better,” he said.

No difference for dog

The mother doesn’t know the difference, Harvey said. He said the adopted mother licks, cleans and feeds the cubs.

The Safari Zoological Park is a licensed facility open since 1989 and specializes in endangered species.

It has leopards, lions, cougars, baboons, ring-tailed lemurs, bears and other animals. It currently has seven white tigers and two orange tigers.

Because white tigers are inbred from the first specimen found more than a half-century ago, they are not as genetically stable as orange tigers.

The zoo’s previous litter of white tiger cubs was born April 23, although one of the three has since gone to a private zoo near Oklahoma City.