I just came across this lp on-line and the bio that accompanied it should be shared with all. Enjoy. I attempted to build a rocket ship when I was younger, I made adjustments to my orange pedal car. It didn’t work out. 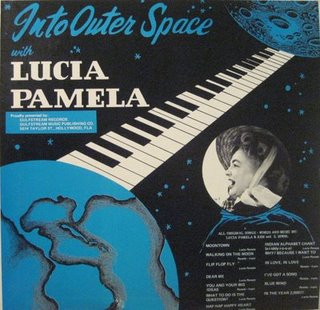 Lucia Pamela, who sadly passed away in 2002 at the ripe old age of 98, was truly a one-of-a-kind entertainer, still remembered today for recording an album in 1969 about her fictional travels to the moon,Into Outer Space With Lucia Pamela, which would have remained all but forgotten if it were not for Irwin Chusid, disc jockey and author of Songs in the Key of Z, who single-handedly helped revive her career by reissuing her album on the independent Arf Arf label.

Her extraordinary life was a mixture of fact and self-invention. She claimed, for example, to be the first person ever on television and radio; that the famous pianist Paderewski told her mother she would be the finest pianist in the world, and that she was kicked out of a German music conservatory for being overqualified. The truth, as always, was a little less colourful.

Lucia was born in St. Louis in 1904. 22 years later she won the title of Miss St. Louis. After performing in local theaters she moved to California, where she managed the Fresno Storyland amusement park and played Mother Goose there as well as hosting two radio shows – The Encouragement Hour and Gal About Town. She formed what many believe was America’s first all-female orchestra, Lucia Pamela and the Musical Pirates, and claimed to be able to play 15 instruments. With her daughter, Georgia Frontiere (who sadly passed away in 2008, just six short years after her amazing mother), she formed the vocal duo the Pamela Sisters. Georgia went on to own the St. Louis Rams. A documentary on Lucia’s life was started by Belgian artist Danielle Lemaire, although copyright arguments between the filmmaker and Lucia’s family halted production.

Into Outer Space with Lucia Pamela was released, she always claimed, after Lucia had built her own rocket which she used to tour the Milky Way, stopping off on the moon to record her album. Lucia played all of the instruments on the album – including piano, accordion, drums and clarinet – and sang of a world where anything was possible and everything was shot through with an innocent joy, excitement and imagination. The ever-resourceful Lucia also created a coloring book that tells the story of a moon trip in which she met cows, Indians and people made of cashews and walnuts. Lucia ran a competition, offering prizes for children who sent in completed, coloured-in copies of her book, immortalised by Stereolab in their song International Colouring Contest.

4 Responses to “Into Outer Space with LUCIA PAMELA – LP”