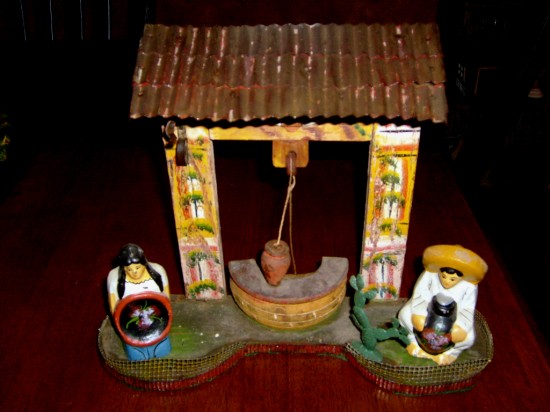 This was a gift from a friend. It once belonged to his grandmother who lived most of her life in the old Mexican barrio neighborhood here in Tucson. Sadly, much of the old barrio neighborhood was torn down to build the Tucson Convention center, but there are still sections of the neighborhood that remain, and, in fact, people are now buying up the old houses with their thick adobe walls and Saltillo tile floors and restoring them.
My friend remembers this piece of Mexican chotchke sitting in his grandmother’s kitchen since he was a little boy in the 1950’s and estimates that it is at least 70 years old. The structure is a covered water well made of painted wood and trimmed in metal screen with a rusty tin roof. There is a salt and pepper shaker sitting on each side made of unfired clay with cork bottoms. The woman figure holds a painted plate and the man holds a painted jug.