In 1966 a hot dog stand was born on the famous Colfax strip in Denver, Colorado.

Several years later, it moved to Aspen Park, Colorado, and sat above Denver in the foothills, until a couple of years ago when it made it’s last move even higher into the rockies, to Bailey, Colorado.

I too this picture when I Drove by it this morning and thought how so many things we see regularly are really out of the ordinary, but we just take them for granted.

3 hours later when I drove by the place again, there was no parking, and a line of about 20 people to order.

The food is good, reasonably priced, but the location and the design bring people up the road to a higher (and cooler in the summer) place to suck down the goodies. 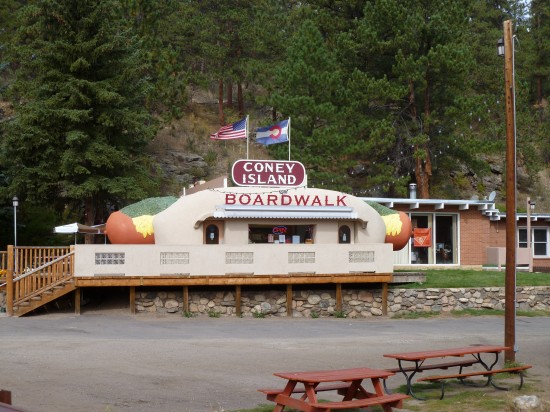 Just google “coney island bailey colorado” for several web sites that discuss this venerable Colorado institution of bread breaking, including a youtube that recorded the last move to higher plain.